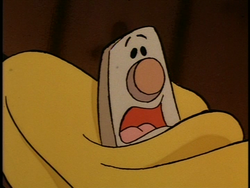 Everyone has a soft side. Blanky, a kind-hearted blanket who helps his friends power through the fight, is soft on both sides.
Trial Team: Blue
Role: Backline Control
Stars:

White Skill - Heat Absorber - Normal Damage
Blanky wraps himself around the enemy with the most HP, dealing X damage and stunning them for 6 seconds.

Green Skill - the Blanket
Blanky stares at enemies, scaring them and reducing their attack speed by 65% for 4 seconds.

Blue Skill - Fabric Fortress
Blanky approaches the weakest ally and shapes himself into a tent, granting himself and that ally X shield, lasting for 5 seconds.

Red Skill - Good as New
Blanky starts each wave with 70% additional attack speed, and will gain X HP for each time an enemy dodges an ally’s attacks.

The attack speed increase and HP gain are both active for 8 seconds.

Blanky + Slinky Dog
Campaign: Shy Away - Slinky helps Blanky get to the Park after the cowardly cover loses his party. During their trek, Blanky shares his story about traveling a long distance to reunite with his Master, to which Slinky is amazed.
Disk: Cozy to the Core
Disk Memory: Blanky gains X additional Skill power each time he performs his Basic Skill.
Disk Power: Z energy gain
Allies: Joy, Kevin Flynn, the Evil Queen

I love it. Thanks for this concept. I would love to see this movie represented in the game

Which movie is he from??

… It literally says in the title of the post that he’s from The Brave Little Toaster.