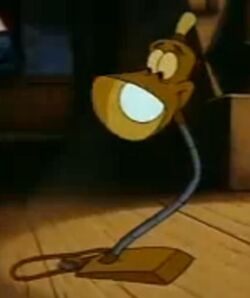 Lampy shines a whole new light on the action. When being constantly pestered, he is a force to be reckoned with.
Trial Team: Blue
Role: Backline Control
Stars:

Quote: “Holy mother of Edison! What were you thinking?! You might have broken my bulb!”

Animations:
Entrance: Lampy leaps into the battlefield and ignites his bulb.
Victory: Lampy jump-ropes with his cord.
KO: Lampy’s bulb goes out. In an attempt to recharge himself, he is struck by lightning.

Green Skill - Snark Attack
Lampy complains at enemies, silencing them and slowing their attack speed by 25% for 7 seconds.

Purple Skill - Electric Wonder
Lampy deals X damage to each enemy he silences when performing his “Snark Attack” skill. His armor is increased to X.