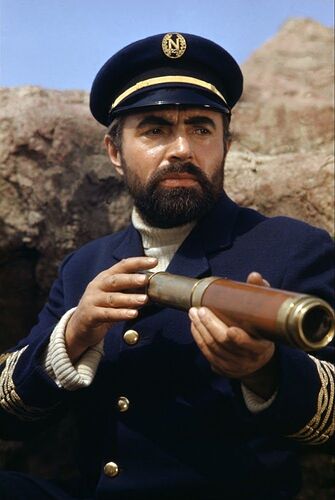 Having powered through the thrashing tides in his beloved Nautilus, Captain Nemo plots a new course where defeat would befall on his foes.
Trial Team: Blue
Role: Midline Tank
Stars:

Quote: “There is hope for the future, and when the world is ready for a new and present life, all this will someday come to pass in God’s good time.”

Animations:
Entrance: Captain Nemo walks into the battlefield, closing his telescope.
Victory: The Nautilus’ wheel appears before Captain Nemo, allowing him to gleefully spin it.
KO: Captain Nemo collapses, as if he had been shot.

White Skill - Collision Speed - True Damage
Captain Nemo calls for the Nautilus to charge at and crash through enemies, dealing X damage to each enemy hit, and stunning them for 6 seconds.

Both the attack speed increase and Skill power increase will last for 5 seconds.

Blue Skill - Ahead Full
Captain Nemo commands his allies, inspiring them and doubling their attack speeds until all allies have reached full energy.

Purple Skill - Going Down With Glory
If Captain Nemo reaches 0HP, he grants all of his Skill power to the weakest ally, while also granting them 25% their max HP.

Red Skill - Heart of the Nautilus
Captain Nemo is immune to debuffs for 9 seconds each time he performs his “Collision Speed” skill.

Friendships:
Captain Nemo + Ned Land
Campaign: Cheating Death - It is obvious that certain inhabitants of the City had watched others die, and yet they still walk. Given that Captain Nemo had also fallen victim to such a terrible scenario, he and Ned try to figure out why the deceased are being brought back, even if they need a god of death to help break the ice.
Disk: Extra Life
Disk Memory: Captain Nemo steals X HP from enemies that take damage from his “Collision Speed” skill.
Disk Power: Z Blue Skill power, Z armor
Allies: Hades, Tia Dalma, Huey, Dewey, & Louie

Captain Nemo + Captain Amelia
Campaign: Submersible Co-Captain - Captain Nemo introduces Amelia to the Nautilus, giving her the luxurious welcome that he had given others prior to his arrival in the City. When creeps begin attacking his prized vessel, he and Amelia take command and ward off the creeps.
Disk: Hope in the Ranks
Disk Memory: Allies gain X HP each time Captain Nemo performs his “Ahead Full” skill.
Disk Power: Z Green Skill power
Allies: Carl, Hank & Dory, Ron Stoppable