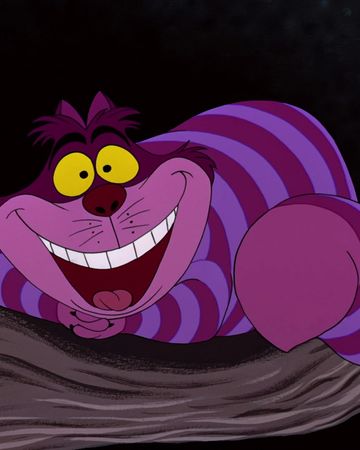 Role: Control
Position: Front
Trial Team: Blue
You may have noticed that I’m not all there myself.

SKILLS
White: That Way
The Cheshire Cat will apply “Pointed” to enemies for 9 seconds. Enemies applied with “Pointed” will fail at using their white skill.
“Pointed” has a chance to fail against higher level enemies.

Green: Tailed
The Cheshire Cat will use his tail to disappear dodging an enemy attack and gaining energy.
This skill can only be used every 7 seconds.

Blue: Not All There Myself
The Cheshire Cat disappears for 5 seconds. While disappeared, he gains HP over time.

Purple: Everyone’s Mad
At the start of each wave, the enemies’ attack and movement speed will be slowed by 30% for 5 seconds

23 Likes
How to Celebrate the Queen of Hearts unlady like behavior & (Anything Wonderland)
NCTzen_Haechan's Concept Gallery
Lady Tremaine - Character Concept Project
Any new Character you'd want to see but never expect?
DH_Fans May 13, 2019, 8:09am #2

Great character concept! Reminds me of the movie.

What is “pointed”. If you want to add a status effect then at least explain it.

Edit: Nevermind I found out but “Pointed” is actually called a “Silence”, where enemies can’t use their White Skill. But the closest one is “Hexed”, where enemies get stunned instead of attacking. But this is only exclusive to Ursula

Yes, you’re correct. However, unlike Ursula, Pointed has no damage and disable, but has a very long duration of Pointed (which is 9 seconds while.Hexed is only 5).

To be honest, seeing as how this concept was sparked by the GIF of the Cat grabbing The QOH flamingolf club, I think maybe he could have a skill doing something related to that.I

Just an example, before an enemy can activate a ability, Chesire Cat instead makes the enemy deal that skills amount of damage to themself.

Chesire Cat can only activate tis effect every 7 seconds.

Just an example that needs work. But good job all the same.

QoH would be so mad if the Cheshire Cat used that skill.

Hi there, just wanted to say I really really loved your build for the Cheshire Cat.

Such a shame he didn’t get into the game though.

I have a question - how do you attach images/gifs properly like what you did here? I tried doing it earlier, with some gifs I made in Giphy or picked from Tumblr/Google Images, but they either showed up as links or refused to play at all. (I’m new to the Forums

I wish you could make a couple more of the Alice in wonderland concepts (aka friends to the Queen of Hearts) especially the Rabbit running around with the clock and that big worm or caterpillar that blows smoke. So I could link them to the thread Queen of Hearts unlady like behavior & her friends. Even though it’s been awhile it would be nice to have them linked together. As here on server 16 we still don’t have Alice or the Mad Hatter I wouldn’t mind linking them with a preview of what we are missing. Not enough to be a spoiler but just enough to be tantalizing to those of us that don’t have them yet!

I have to watch the movie first before making a concept. I can’t make a decent concept without knowing what they have done in the movie. Want me to give you a shoutout when I finally posted the concept?

The caterpillar… Puffed smoke, gave directions about eating a mushroom, and then turned into a butterfly and flew away.

The rabbit… Whined about being late, was late, lost his gloves and had Alice go get them for him, but she turned big in his house, he threw stones at her, but the stones turned into cake and when she ate them, she shrank again… did he have another purpose???