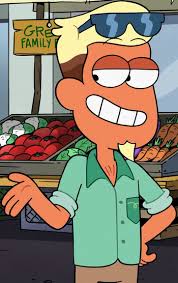 Description: This maniacal man of business will manipulate enemies across the battle field, using his henchman to take them down
Quote: “After my big plan, you and your family will regret ever stepping foot in my city! Chip Whistler’s city!”
Trial Team: Yellow
Entrance: Chip will maniacally walk into the battle field
Victory: Chip will begin dancing and mocking the enemy team
Death: Chip’s teeth will disintegrate. If Chip unlocks his purple skill he’ll begin to stand with anger
Stars: one
Role: Midline Damage

White skill: Chipocalypse Now: True Damage
Chip will call in one of his employees who will fly in on a helicopter and fly through the enemy line. Dealing X damage and apply shatter to all enemies

Green skill: Wreckining Ball: Fantastic damage
Chip will call in one of his employees to go to the backline with a wrecking ball and slam it onto the enemy who is furthest back, dealing X damage and stunning them for 5 seconds

Blue skill: Big Coffee Crisis: normal damage
One of Chips coffee trucks will drive in and kidnap the enemy with the most health. They will be off the field for 15 seconds and then be brought back. When brought back they will be dealt X damage. They will also have X energy stolen and given to Chip, this will also apply White-Collar for 10 seconds to Chip. White-Collar will have Chip steal X energy from an enemy when he uses his basic attack

Chip Whistler and Bill Green
Disk: Wreckonailation
“Wreckoning Ball” now can apply shatter
Bill wants Chip to apologize for all the bad things he has done to the Green Family. Chip sees this as an opportunity to trick the Greens so he can destroy their house
Allies: Tilly Green Alice Green Cricket Green

Chip Whistler and Gaston
Disk: Pearly Whites
Chips basic damage is increased when he has White-Collar
Gaston and Chip compete to see who has the best teeth
Allies: Belle Beast Bill Green