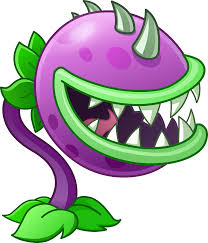 Description: The Venus Fly Trap of zombies, Chomper is about to bite his way through the competition
Quote: Speaks via grunts and growls
Stars: 2
Entrance: Chomper will sprout it’s head out of the ground, making it appear as a bud. Then he’ll completely arise out of the ground as he chuckles
Victory: Chomper will spin around before roaring in victory
Death: Chomper’s head will fall to the ground and he’ll burp, causing a zombie’s hand to be spit out
Role: Midline Damage

White skill: Underground Meal: True Damage
Chomper will burrow under ground and travel to the enemy of the players choice, Chomper will then arise from the ground to chomp the enemy, dealing X damage. If the enemy is at or below 25% of health, they will be instantly KOd, although, when he does insta KO an enemy he will be in a stun like state for 5 seconds due to him needing to chew and swallow

Green skill: Spikeweed Spit: Normal Damage
Chomper will spit 2 Spikeweeds into the enemy line, they will remain there until an enemy steps on one. When stepped on, the enemy will take X normal damage and will be snared for 5 seconds. They will also have 5 stacks of Gunk applied to them for the rest of the wave, similar to stacks of honey, they make the enemy their attack speed 5% slower for each stack the enemy has but also decrease the enemy’s basic attack power by 5%. There can be up to 20 stacks on an enemy

Blue skill: Gunk Ball: Fantastic Damage
Chomper will spit a ball of gunk into the enemy line, dealing X damage over time for 10 seconds and apply three stacks of Gunk to all enemies

Purple skill: Next Meal
Chomper and allies will deal 5% more damage to an enemy the more stacks of Gunk they have

Red skill: Zombie Trap
Chomper’s basic attack power is increased by 10% for each snared enemy on the battle field, this resets at the end of each wave

Chomper and Colette
Disk: Exotic Foods
Chomper can now insta kill enemies at 50% health with his “Underground Meal” skill, but will be in a stun like state for 15 seconds instead of 5
Collate sees Chomper as her greatest challenge, a true test to her cooking abilities
Allies: Linguine and Remy Swedish Chef Goofy

Chomper and Gerald, Marlin, and Nemo
Disk: Fish Are Friends Not Food
Chomper will gain a 20% skill power increase for 15 seconds after KOing an enemy
Chomper attempts to eat Marlin and Nemo, Marlin is obviously not ok with this so he tries to convince Chomper they aren’t food
Allies: Hank and Dory Maui Milo Thatch

Great concept! I like all of the skills, and it’s great how true to the games you’re being by having him have to pause after eating someone. Good job!

I think this should be Colette.

Thank you so much, sorry about that typo though lol.

It’s fine. The rest of it is really great, though!

Thanks man, really appreciate it!