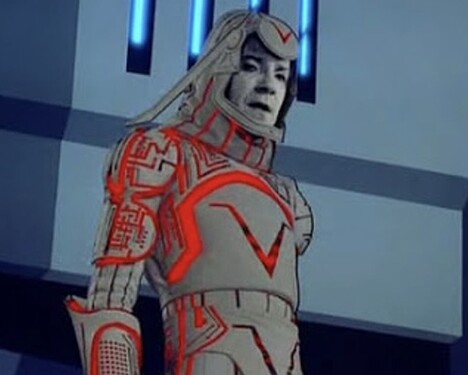 Quote: “I’ve been hoping you’d send somebody with a little bit of guts.”

Animations:
Entrance: Sark rezzes into the battlefield.
Victory: Sark holds out his fist triumphantly.
KO: Sark’s identity disk breaks in half, and he falls forward on the floor. If his Purple Skill is unlocked, his red lights turn white, crackles with electricity, and falls to his knees.

White Skill - Game Over - Fantastic Damage
Sark throws his identity disk at enemies, hitting each one repeatedly in a trail of yellow light and dealing X damage with each hit.

Purple Skill - MCP Functions
If Sark reaches 0HP, the MCP reveals himself and transfers all of his functions to Sark, restoring his HP completely and making him bigger, increasing his overall Skill Power to X.

While enlarged, Sark cannot perform any skills, and his Basic Skill changes to stomping on enemies, dealing X damage, and stealing X armor.

His White Skill power is increased to X.

Red Skill - Dead Zone
At the start of each wave, Sark is invincible for 12 seconds, all while stealing X energy each time he deals damage to enemies.

Commander Sark + AUTO & GO-4
Campaign: Data Mind Collision - Imagine what combining AUTO and the MCP’s softwares could accomplish! Would their artificial intelligences work together to take over the City and all its heroes and villains, or would they clash against one another to decide which of them truly bears the iron grip?
Disk: Error 404
Disk Memory: Sark’s “Game Tank” skill deals X additional damage and removes X armor.
Disk Power: Z shield power
Allies: Linguini & Remy, Mr. Incredible, Vinny Santorini