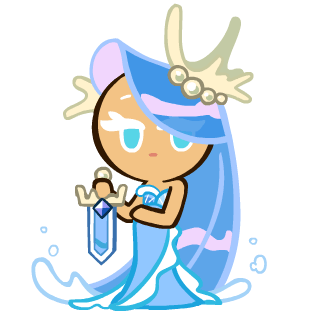 “My heart…it was never frozen.”

The mythical Sea Fairy Cookie summons large frozen waves to fight her enemies and her fate.

White Skill: Powerful Waves (Fantastic Damage)
Sea Fairy summons 3 large waves that damages enemies and knocks them back. The waves do at least X damage. The damage increases as the waves travel, up to a max of X damage. This skill freezes enemies above 50% of their max HP for 10 seconds.

Wave Drop can still preform this even if Sea Fairy is disabled.

Purple Skill: Essence of The Ocean
Sea Fairy will prefer to target frozen enemies with her basic attacks and skills. “Powerful Waves” will deal X additional damage to enemies who are already frozen and will remove all active buffs on them.

The buff removal have a chance to fail against enemies above level Z.

Red Skill: Warmth Of Heart
Sea Fairy heals the weakest ally 5% of her Max HP and grants the rest 50% of her skill power while she is still in the fight.

Sea Fairy and allies cannot fall below 1 HP while they are frozen.

This effect is reduced on allies above level Z.

Sea Fairy-Moana
Island Course
More Waves
+Z Damage to “Powerful Waves”
• Sea Fairy converts all active debuffs on her into waves, and reapplies them to enemies with “Powerful Waves” The debuffs last 20% (+20 per star level) on enemies.