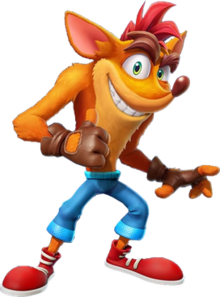 Description: Failed experiment to hero, Crash will smash his way through the creeps but first he needs a nap
Quote: “Woah”
Team: Yellow
Entrance: Drives a cart into battle before it explodes landing him into his position
Victory: does the crash dance

White Skill: N. Sane Spin:Fantastic damage
Crash will spin until his energy meter runs out dealing damage with each hit. Crash is invincible during this move

Blue skill: Slide jump flop: Fantastic damage
At the start of each wave Crash will slide damaging any enemies in the way, he will then jump and do a belly flop damaging all enemies and stunning them

Purple skill: Aku Aku
Crash now will throw out an extra life crate when he uses “Smash and Crash”, when it hits an enemy it will give Crash an extra life. Crash can have up to 2 extra lives at a time. When Crash reaches zero percent of health and has an extra life, he will lose that life and then revive himself bringing Aku Aku with him giving invincibility for 10 seconds 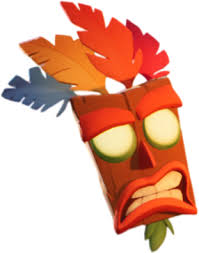 Red skill: Nitro Fueled:True damage
When “Smash and Crash” is used Crash will throw out an Nitro crate along with an Extra life crate and TNT crate. If Crash uses this after he revives himself and it hits an enemy, he will gain X health

Crash and Timon and Pumba
Disk: Wumpa of Hunkuna Matata
If Crash gets a kill his green skill cooldown will be reset
Timon introduces the idea of Hunkuna Matata to Crash. Crash loves it but Aku Aku is skeptical, he ends up being right when the creeps attack and Crash is not prepared
Allies: Simba and Nala Hopper Baloo

You’re starting to spam concepts again. Please slow down and take some more time before posting your next one.

nice Concept! You know what I know that Crash Bandicoot isn’t a disney character but I want him to be added

Glad you like it but I think this is considered a dead topic. Please don’t revive dead topics. I mostly do cartoony characters if your wondering