Mason and Phil (from Madagascar) 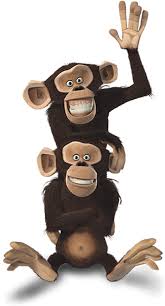 Description: These two may be chimps, but they are at a very high intelligence.
Quote: “If you have any poo, fling it now.”
Stars: 1
Trial Team: Blue
Entrance: Mason and Phil will walk in with there human disguise 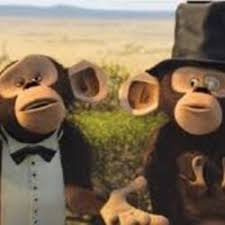 Left: Mason Right: Phil
Victory: Mason will eat a donut while Phil will drink coffee
Death: Mason and Phil will put there hands up and smile awkwardly as there disguise is revealed
Role: Midline Control

Basic Attack: Phill will throw a banana at enemies

Green skill: Out Of Translation
Phil will translate something offensive in sing language, silencing the closest enemy for 15 seconds and decreasing the enemy’s basic attack power by 20% for 10 seconds

Blue skill: Plane Pick Up
Mason and Phil will call in the Super Plane to fly up to a random enemy and pick them up using the bucket hanging from it. They enemy will then be taken off screen for 10 seconds, they will then be set back down in they’re previous position. They’re skill power and basic attack power will be decreased by 30% for 15 seconds

Red skill: Own Agenda
Mason and Phil along with allies will have they’re skill power increased by 20% whenever they damage enemies with a random debuff

Mason and Phil and Milo Thatch
Disk: Study Mishaps
Mason and Phil have a 15% chance to apply a random disable with they’re basic attack for 10 seconds
Milo is at Aw with the intelligence of the two sophisticated apes. But they want nothing to do with his studies and instead mess with his expectations by acting very dumb
Allies: Baloo Bunsen and Beaker LudWig Von Drake

Mason and Phil and Crash Bandicoot
Disk: Moron Marsupial
Mason and Phil will heal all allies X health when they KO a silenced enemy
Mason and Phil do not like Crash’s stupidity and try to teach him the ways of the ape, whatever that means
Allies: Jessie Mickey Mouse Vinny