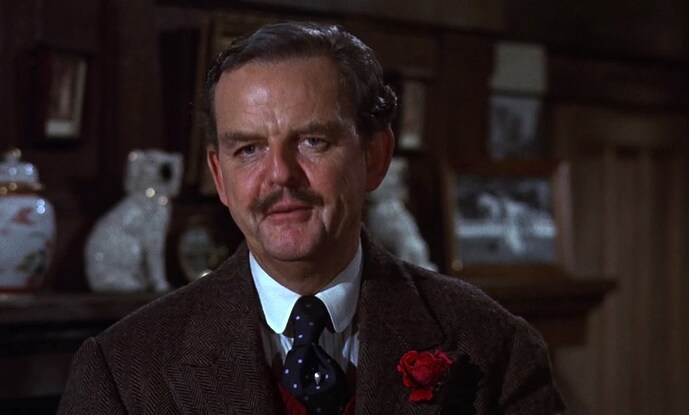 Professor Emelius Browne might not be as skilled in the arts of magic as Mrs. Price, but he can still be a worthy asset when working among the heroes.
Trial Team: Blue
Role: Frontline Tank
Stars:

Quote: “C’mon, my boy. For once in your life, you’ve got to believe in something.”

Animations:
Entrance: Emelius enters the battlefield as a rabbit, reverting into his normal form and getting back up on his feet.
Victory: Emelius claps his hands in astonishment.
KO: Emelius attempts to drive a nail through a frame of glass without breaking it, but ultimately fails.

White Skill - With a Flair - Fantastic Damage
Emelius looks into a mirror and turns himself into a rabbit, becoming untargetable by enemies for 9 seconds.

Green Skill - Command the Show-How
Emelius reaches his arms into the air, triggering a pyrotechnical flash of light that deals X damage and blinds enemies for 8 seconds.

Blue Skill - Illusionary Emporium
Emilius puts eggs and milk into a hat, and tosses it at the strongest enemy, stunning them for 7 seconds. After the stun time is over, their attack speed is slowed by 40% for 7 seconds.

Purple Skill - They Work For You
Until Emelius reaches 50% his max HP, he cannot be charmed. His attack speed is increased by 25%, and his max HP is increased to X.

Red Skill - What They Seem To Be
Each time Emelius performs his “With a Flair” skill, allies grant him X additional HP while in his rabbit form.

Friendships:
Emelius Browne + Eglantine Price
Campaign: Life in the City - Eglantine and Emelius learn how to get used to the City and its strange modern touches. Minus the creep invasions, they find it is something they can easily get used to.
Disk: City Sweet City
Disk Memory: Emelius gains X reality for every second enemies are blinded by his “Command the Show-How” skill.
Disk Power: Z armor
Allies: Quorra, Gizmoduck, Wasabi

Emelius Browne + the Manticore
Campaign: Magic Seekers - The Manticore meets Professor Browne on her journey to find an ancient magical relic that she thinks will repel all creeps in the City. Emelius is interested in the idea, and the two head off to finish their new quest.
Disk: Fact Over Fiction
Disk Memory: Emelius deals X additional damage to enemies that were effected by his “Illusionary Emporium” skill.
Disk Power: Z Basic Skill power
Allies: Duke Caboom, Gonzo, Goofy