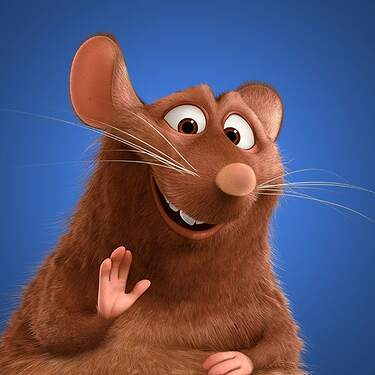 Emile finds a lot of treasure buried in trash, sometimes edible, and sometimes not. When he rolls into the fight on his cheese trolley, his appetite for action kicks in!
Trial Team: Yellow
Role: Backline Tank
Stars:

Animations:
Entrance: A cheese trolley rolls into the battlefield by itself, with Emile standing on it and holding a mushroom on a metal skewer.
Victory: Emile cheers, holding his mushroom skewer triumphantly.
KO: Emile tries in a final effort to throw his mushroom skewer, but gets struck by lightning beforehand.

White Skill - One Man’s Trash - Normal Damage
Emile throws a ball of trash at the weakest enemy, dealing X damage and removing X reality from them.

Green Skill - Wide Variety
Emile eats from a wheel of cheese, granting himself X additional HP over a 7-second time block. If an enemy deals damage to Emile while he is eating, he kicks another wheel of cheese off the trolley and into that enemy, dealing X damage.

Emile can kick multiple wheels of cheese off the trolley at a time while eating. After Emile has fully gained the intended amount of HP, the skill is over.

Purple Skill - Eat Your Heart Out
For each time Emile performs his “Wide Variety” skill, each enemy hit by a cheese wheel has X armor removed. His max HP and Basic Skill power are increased to X.

Friendships:
Emile + Gadget
Campaign: Lab Rats - Emile stumbles upon a battle between Gadget and a horde of creeps. In an attempt to escape, Emile accidentally sends a dumpster rolling into the creeps. Gadget, thankful for his unplanned assistance, offers to help him search for food throughout the City.
Disk: Dinner’s On Me
Disk Memory: Emile steals X reality from enemies he hits using his Basic Skill.
Disk Power: Z armor
Allies: Moana, Carl, Li Shang

Emile + Linguini & Remy
Campaign: Kitchen Chaos - Chez Remy has fallen short-staffed. Being the good brother that he is, Emile offers to help Remy and Linguini serve their customers, with only a few mishaps slowing them down.
Disk: Sous Chef Sensation
Disk Memory: Emile cannot have HP or energy stolen from him while performing his “Wide Variety” skill.
Disk Power: Z shield power
Allies: Robin Hood, the Rocketeer, Duke Caboom

once again, i should have posted this before, but:

you can love it but there is one flaw:

Emile eats from a wheel of cheese, granting himself X additional HP over a 7-second time block. If an enemy deals damage to Emile while he is eating, he kicks another wheel of cheese off the trolley and into that enemy.

what does the cheese wheel do? i assume it does damage, however a damage type is not listed.