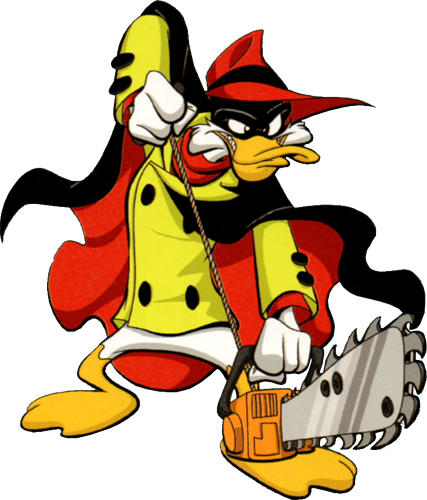 "So, St. Canard has a new favorite hero, eh? And a little girl at that! The perfect target for public enemy number one.”

The evilest doppelgänger Negaduck hails from the negaverse, an alternate reality where good guys are bad and bad guys are good. With his evil schemes and maniac weapons, Negaduck will shred anything that comes in his way!

Negaduck revs his chainsaw 3 times, scaring all enemies for 15 seconds and silencing the front most for 7 seconds. He then slashes his chainsaw at the enemies 3 times, dealing Y damage with each slash.

Negaduck shoots the closest enemy with his shotgun 3 times, dealing X damage per bullet and knocking them back with the last bullet. All other enemies will be blinded for 8 seconds.

Negaduck taunts the “Most Wanted” enemy by blowing a raspberry at them, reducing their attack speed by 45% for 4 seconds, reducing their basic damage and skill power by X, and their debuffs extended by 5 seconds.

Negaduck is immure to debuffs while at least one enemy is scared.

Debuff immunity has a chance to fail against enemies above level Z.

Negaduck-Megavolt
Electrifying Member
Knocked Back Enemies are Stunned
+25 (+25 per star level) Evasion
+Z Skill Power
• Knocked back enemies are stunned for 1.5 (+1.5 per star Level) seconds.
• Negaduck knocks back enemies every 3 basic attacks and heals Z HP when an enemy is knocked back.

Negaduck-Scar
Hench’s Wrench
Invisibility on Speed Buff
+Z Reality
+25 (+25 per star level) Reality Negation
• When Negaduck gains an attack speed buff, he becomes Invisible for 3 (+3 per star level) seconds. This only activates once per wave.