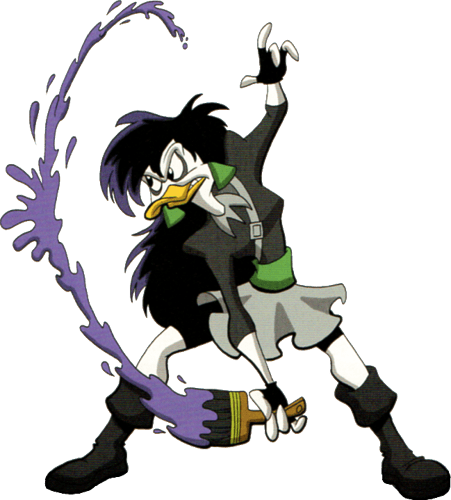 “As you can see, I have discovered chemical compounds that allow me to change and control art! Unfortunately, my depleted finances has hindered my showing the world what I can accomplish! In other words, I’m broke.”

Passive: Splatter Phoenix has a 1% chance to blind enemies for 5 seconds every basic attack. This increase by 1% for every 1% missing HP on the enemy.

Active: Splatter Phoenix paints a Block Golem to fight the enemies. They have X HP and deal X damage with each basic attack. When they are created, they deal Y damage to all enemies and stuns them for 5 seconds. Splatter Phoenix can have up to 3 Block Golems. If there are already 3 then she will heal them for X HP.

The stun has a chance to fail against enemies above level Z.

Splatter Phoenix steals the mouths of the 3 closest enemies, dealing X damage and silencing them for 10 seconds.

This also removes 50% of the enemy’s normal and fantastic crit.

If the enemy has an armor or reality debuff before, they receive an additional Z damage.

Purple Skill: Worth A Fortune

If an enemy or ally gains a basic damage, skill power, armor, or reality debuff, Splatter Phoenix gains Z skill power. She retains this 50% of this buff when carried from wave to wave.

Gonna push this up so people can check it out.

Wait I know her she’s from darkwimg duck right?