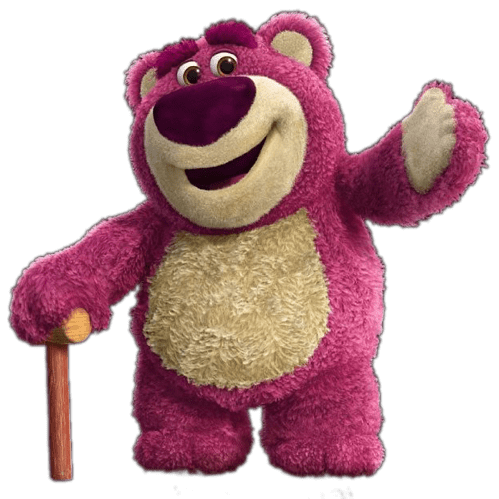 He may look plush and lovable, but this bear shows that he is far from a good guy

Entrance: lotso rides in on the back of his dump truck then he jumps off

Victory: he smiles as he places his cane in front of himself

Defeat: he falls to the ground in his non-living form

Basic attack: whacks the nearest enemy with his cane, dealing x damage and stunning the enemy for 5 seconds

Passive: Lotso steals x HP from each enemy he or another ally charms.

Active: lotso uses his cuddly appearance to charm the two nearest enemies while also healing himself for x amount.

Each enemy that lotso charms with the move now has their armor and movement speed increased by 40% while enemies skill power are decreased by 40% as well.

Losto takes out big baby’s pendant, drops it on the ground and then smashes it with his mallet, scaring all enemies for 10 seconds while also increasing the duration of all scares and charms by 5 more seconds.

Blue: eye in the sky

If a enemy becomes invisible, a security camera will appear in the battlefield and then catches the invisible enemy which makes lotso “precise” for the rest of the wave while also increasing his attack power by 50% against the invisible enemy.

Lotso heals himself for X amount whenever a ally gets ko’ed in battle while also increasing the amount of damage that allies deal with their blue skills.

Losto gains 50% of all buffs given to enemies that he has charmed with “I’m a hugger”.

Lotso/Baloo
Bear with it
crits against scared enemies