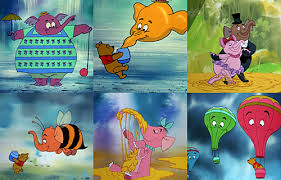 Entrance: a Heffalump walks in then turns into a woozle before splitting and turning into the striped Heffalump with the bow and the polka dotted woozle

Victory: two elegantly dressed Heffalumps appear then they ballroom dance with each other

Defeat: the Heffalump and woozle fades away in a magical poof

Basic attack: the Heffalump shoots a cork from its trunk at the closest enemy, dealing x damage.

White: March for the hunny

A random group of marching Heffalumps and woozles walk through the enemy lines, dealing x damage and inflicting a random effect depending on which group marches onto the battlefield.

Trumpet-nosed woozle: silences each enemy it passes through

Heffa-cannon Woozle: stays in the backline and fires a hunny pot out of the trunk of the Heffalump cannon which hits the closest enemy, dealing x damage to the enemy, slowing their movements for 40% and inflicting them with two stacks of “hunny”

A giant heffalump with the body of a bee floats above the enemy team and steals 30% energy from each enemy its passes through, it has a 50% chance to be carrying a hunny pot which then it flys down onto the enemy team and dissapears in a puddle of hunny, dealing x damage to all foes, slowing their movements and inflicting them with two stacks of “hunny”

A jack in the box randomly appears on the battlefield. after 5 seconds, a woozle pops out of the box while maniacally laughing, this scares the closest enemies to the box and also stuns them for 5 seconds.

Enemies are stunned and sapped at the start of each wave for 7 seconds.

The Heffalumps and woozles steal 30% energy for each time that they inflict a stack of “hunny” onto an enemy.

All hunny-inflicting moves from the Heffalumps and Woozles now inflicts two more stacks of hunny.

All disables done by Heffalumps and Woozles last 4 seconds longer.

i hope you guys enjoyed this very confusil concept. if you want too, check out these other villainous/spooky concepts that I think you will enjoy