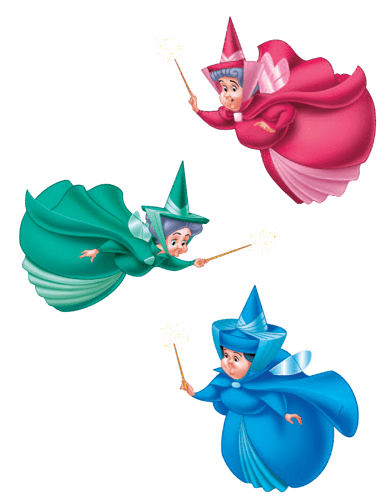 “You know our magic doesn’t work that way. It can only do good, dear, to bring joy and happiness.”

Armed with their magic wands, the three good fairies disrupt their opponents using their magical expertise.

Entrance: They fly into position.
Victory: They clap their hands and cheer.
Defeat: They shrink down and fly away.

Basic Attack: One of the fairies shoots a colored light beam from their wands.

Active- Merryweather flies to the Front-line and casts a spell on the enemy with the most energy and sapping them for 6 seconds and deals X damage. Merryweather will return back to position afterwards.

When Flora, Fauna, and Merryweather reach 50% Max HP for the first time, Fauna conjures a cake to the front-line with X HP. When the cake is defeated, it will collapse onto the enemy that destroyed it, dealing Y damage to them.

This can only be activated once per battle

Blue Skill: Make it Pink
Flora creates a pink dress for the enemy with the most skill power. This charms the enemy for 6 seconds and they gain X skill power and 25% attack speed.

The Charm and Attack Speed increase may fail if enemy is over level Y.

Flora, Fauna, and Merryweather and Merlin

For those of you who gave a 3 and 4 star rating, so @Grim_grinning_Ghost @Fighter71 and @Queenie123 please give reasoning behind the ratings? Cause this concept is awesome and I want to bet the person who made this would like feedback.

I think this is a little too big for passive white skill. Jack-Jack had to finish an entire friendship campaign so his basic attacks deal fantastic damage.

Looks like Davy Jones too me… But the damage at the end makes the difference.

I’m not sure how this would like in the battlefield but the effect is good…
That’s all… If there were 4,5 stars, I’d gread it like that… But it’s more four than five… But its6a great concept… Really good…

Thank you @Scarlet_Captain for the feedback.

I think this is a little too big for passive white skill. Jack-Jack had to finish an entire friendship campaign so his basic attacks deal fantastic damage.

All Nightmare Before Christmas characters do that without a disk… tbh I don’t see where’s the problem. It’s not like fantastic damage is stronger than normal damage anyway

I completely agree. In terms of passive skills, it is not the most OP, but it is a good one.