So… new concept!
I decided to take a break from the ATLA series (I will complete it eventually… heh) to make a concept on my favourite Omori boss, the Unbread Twins!

I usually use pics from the original source to make skill pics, but I couldn’t really find anything in this case, so some of them are random drawings I found on the Internet (and a fanart)

Also the skillset is supposed to mirror their bossfight in the game, of course rebalanced to fit Disney Heroes. 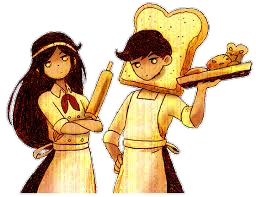 Coming from their holy kitchen in the Orange Oasis, the Unbread Twins are tired of baking fresh bread for all of eternity. They join the battle together, doing their best to fight creeps with their cooking utensils and their ingredients. Watch out for dessert!

The Unbread Twins are a front-line tank hero

Entrance: The Unbread Twins walk to their position, where their oven and their ingredients counter are.

Victory: both Twins smile. Doughie leans on the counter, while Biscuit raises his tray.

Defeat: The Unbread Twins notice they’re out of ingredients and look worried.

Passive: with each basic attack, Doughie hits close enemies with her rolling pin, dealing Y damage, while Biscuit takes some bread from his tray, healing himself and Doughie by Y and increasing one of their stats by 25% for 10 seconds.

Active: the Unbread Twins pull out Slice, Sesame and Sourdough from the oven! The bread kids have X HP and Y Basic Damage each, and attack enemies until they’re KOed.

The Unbread Twins can’t use this skill again until all three bread kids have been defeated.

The Unbread Twins eat cookies, fully healing their HP and increasing their max HP by X for the rest of the wave.

The Unbread Twins can’t be KOed by this skill.

As the Unbread Twins reach certain percents of their Max HP, they become sadder:

These effects last until the end of the wave once they’re activated.

The damage reductions are less effective against enemies above level Z.

When the Unbread Twins become Miserable, they take 100% less damage until they activate “Fresh Bread” once.

The Unbread Twins gain 250 Energy when a bread kid is KOed.

The Energy gain is less effective if the enemy who KOed the bread kid is above level Z.

Unbread Twins - Kronk
Friendship Campaign: Cooking with the Twins
Campaign Overview: Kronk has been fired by Yzma! He’s really sad about it, until he finds out a local bakery is looking for a cooking assistant!
Allies: Bunsen & Beaker, Bolt, Yzma

Unbread Twins - Scrooge McDuck
Friendship Campaign: The Commission
Campaign Overview: Scrooge commissions the Unbread Twins with a huge order for a ceremony. The Twins do their best to overcome this challenge.
Allies: Peter Pan, Colette, Ariel

Hope you liked it!!

Also, I’ve seen other people do it with their concepts, and I was wondering, which disk would you rather choose?

Whoa whoa whoa
There are depressed bread makers in Omori? And bread kids?!

And yeah, I don’t see any issues with the concept

Lol
I love this name

There are depressed bread makers in Omori?

That’s just how those living bread thingies are called lol

I love this name

Oh.
Then you’d love a friendship campaign for them cause they say it all the time

Nice concept. I like how the blue skill contributes to their purple skill. They sound tough to defeat…

Does it matter that I feel a bit biased because I like their theme?

They sound tough to defeat…

Like in the original game, expect a long fight lol

Except they don’t run out of ingredients here

Does it matter that I feel a biased because I like their theme?

Right now I’m writing the campaign with Kronk, I already know what I want it to be like so I said to myself, why not?