I would never expect this… but 4.1.10 made red skills so much easier to the max, this is just amazing change, one of the best ever… this really deserves a thank you towards @Loutre @Nugget, and whoever was doing these changes, really hoping the rest of the economy will be fixed like today, great job!

If anything needs to be pointed out… red skill crates (both consumable and the event one) are even more outdated, maybe worth updating these too…

We told you we were looking into fixing that Red Skill economy!

*Checks date
Nope, not April 1, wow, this is a great change!

It’s a positive change, to be sure, but:

Wow that looks very very good! It was 1500 if I’m not mistaken, so this is a great improvement

And yes the Red skill chips in the campaign was a nice suprise. I honestly won’t know why it wasn’t in the patch notes, cause it would have balanced my view for the better quite a lot.

The goal is to keep things as double drops. Triple drop events will be less likely.

Are there any plans to look at the Hero Chip economy, as those are also needed for maxing red skills and are, if anything, in even shorter supply than the red skill chips have been?

We are keeping an eye on it, but no plans right now. We’re looking at other things first. I believe the Yellow rank is planned next to get changes.

This is a fantastic move! Thanks PB!

Could be better, but it’s fine, the problem are all other stuff other than hero chips, they are just trash.
Dupes though should give 20 hero chips no matter if it’s 1*, 2*, or 3* hero. Making it better for 1* and 2*.

But then, almost 3k hero chips are needed to fully max hero… so yeah, diamond crates by the end are far from perfect.

Diamond crates don’t provide enough hero chips to warrant their gem value. They are nice when they are free (e.g. as reward) but buying them for gems or money - total waste. Or at least that is how I feel about them.

The goal is to keep things as double drops. Triple drop events will be less likely.

Thanks for the info.

We are keeping an eye on [the Hero Chip economy], but no plans right now.

As of right now, for heroes available in two Elite Campaign nodes, players can expect to get 93-94 hero chips from those two nodes every four weeks. It currently costs 120 hero chips just to keep a hero’s red skill maxed with each new cap raise, a cost that increases steadily with time; before long, it’ll cost more than the 140 chips that can be farmed every four weeks for heroes in three Elite Campaign nodes. And that’s just to keep pace with the cap raises; if you’re new to the game or trying to work on a hero you’ve neglected before, you can utterly forget about getting enough chips from Elite Campaign to get a skill to the max level.

And yes, it is possible to spend 20 diamonds to reset each node and get more chips; that still means, for 2-node heroes, players would be spending 1200 diamonds per month in order to get enough chips to max a hero’s red skill after farming for a year or so, depending on how many chips they get from other sources.

Diamond crates have a drop rate of 32% for Hero Chips (usually 1-4 chips, IIRC) and 20% for a full hero (or 7, 18, or 30 chips if a player already has that hero). Given how few heroes most players can afford to work on and try to maximize red skills for, I’d say maybe 10% of those drops are actually usable. Changing the “full hero” drop quantity to a flat 20 chips, as Musketeer suggested, would help greatly, but even then I think we’d need to see a significant increase in the amound of Diamond crates awarded in contests, Weekly Quest rewards, etc. if they’re going to be a major source of hero chips.

Personally, I would just straighten it to 30 Hero Chips for every hero as an “unlock” considering we need 2k+ to max one’s red skill plus 500 to max stars.

Or, alternatively, up the gold in Surge to what it was before for over 10M lineups and having buy max option on Gold Crates (saves fingers and returns about 50% of spent value).
Though with this I think the “Spend X Gold” contest scoring would vanish since it’ll be pretty much about “who has the most gold scored?”

Could be a 50/50 split between 30 Random Hero Chips and badges (purple and above) honestly.

Blue are already covered by Gold Crates.
Credits in the given quantity are generally useless.
And the 2-6 Hero Chips drop is also useless now.

Only thing that triggers me a bit is, that people wasted hundreds of resets on the two events before and now you can get 30 skill chips per raid with double drop

but I guess we should be happy with this permanent change

Thanks for the Red Skill update @Loutre @Nugget

[image] Yes please! This was the most succinct such post I could find. @Loutre we really do suffer a shortage of Hero Chips at the current level cap. This topic is a year old - so around 60 levels old - and upgrading Red Skills & Mods was already a stretch back then. 60 levels later, it’s becoming impossible to keep Red Skills up to date because there’s no reliable way of earning enough hero chips (Elite Campaign is not the answer). This is the main culprit - The move to have every new her…

this is just as relevant now, if not moreso

While I appreciate the increase in red skill chips, it baffles me that you guys only consider them when fixing the red skill economy

It takes 3 kinds of resources to lv up red skills. And by far, the hardest one to earn is hero chips. The amount we earn is the same since day 1 but the cost we need to spend us a nightmare now

Personally, the amount of hero chips needed for red skills should stay THE SAME for EVERY LEVEL, instead of increasing every cap raise like this. If we only needed 5 hero chips per lv (that makes 25 per cap raise), the situation would never be this bad. 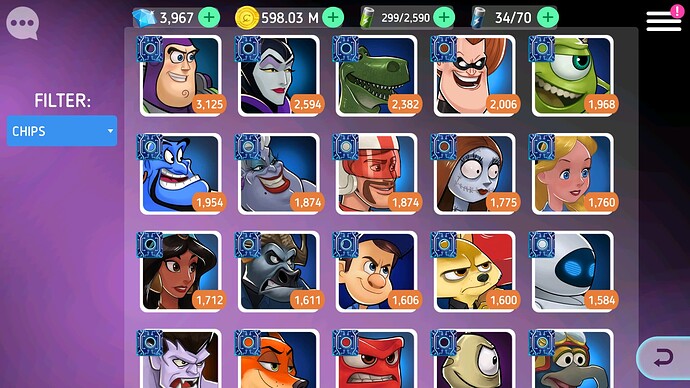 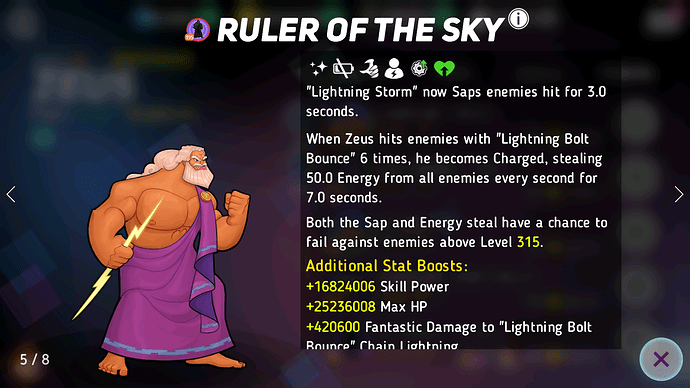 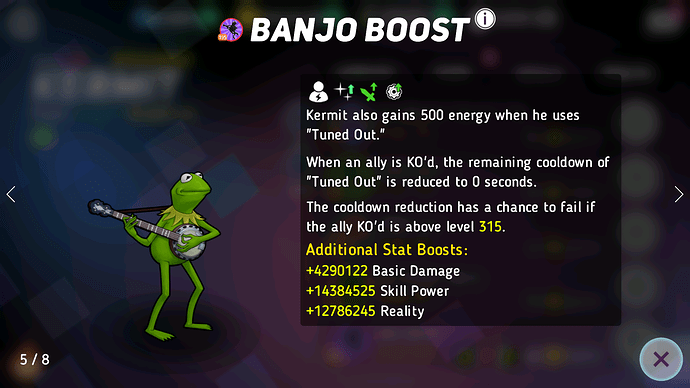 nearly all of those in that inventory screenshot are old, 3* unlock heroes - as mentioned, these are among the few that we can gain enough chips for from Diamond Crates

I specifically showed the old heroes and the meta ones (Zeus and Kermit). I’m an average player and don’t buy any red skills or hero icons on purpose. Every day I go through the heroic stages of the heroes I need, Zeus and Kermit are fully pumped, as you can see. if you need some kind of character, then you can do it like that if the hero is in the heroic stages.