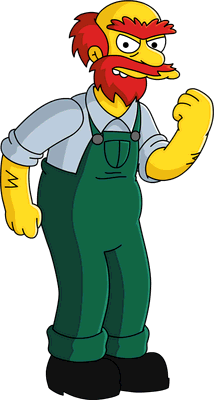 “If elected mayor, my first act will be to kill the lot of ya, and burn yer town to cinders!”

When he is not doing his duty as a groundskeeper, Willie unleashes his scottish agression onto the creeps with his tractor and even his rake

Entrance: Groundskeeper Willie rides into the battlefield on his tractor before he then jumps off and branishes his rake (Until B0)

Victory: Groundskeeper Willie happily rakes the ground in front of him

Groundskeeper Willie rips his shirt off in a fit of rage which shows off his surprisingly fit physique, he becomes berserk until his energy runs out, has his attack and movement speeds increased by 100% and is granted X attack power for every X amount of damage he deals while he is berserk.

For every third basic attack, Groundskeeper Willie pulls out a shovel and whacks the nearest enemy on the head with it, dealing X true damage to the foe and stunning the foe for 7 seconds.

“Scottish rage” now grants all allies 100% movement speed and X attack power per each second of the berserk on groundskeeper willie.

“Be-shoveled” now halves the duration of a random positive effect on the target enemy.

When Willie goes under 45% of his health, he instantly activates “Scottish rage” no matter how much energy he has at the current moment and heals himself for 15% of his current skill power.
+X skill power
+X damage to “Be-shoveled”
+X basic damage

And, just an idea, maybe Scrooge could be a friendship?

Scroogecould make sense he is irish

… Scrooge is Scottish, not Irish.

Willie also is not Irish, rather he is Scottish.