“Sometimes it’s just hard to be in some else’s shadow. And that’s sayin’ alot, I am a shadow.”

The daughter of the Boogieman and her faithful shadow comes out of the darkness to evoke terror to their enemies.

Entrance: A shadow slinks in. The shadow than turn into Misty as Whisper takes her place.

Defeat: Misty puts her hood up in shame as she slinks back into the shadows

) Misty disappears into the shadow and reappears in front the enemies. She lets out a banshee-like scream dealing out X damage and scaring enemies for 6 seconds.

The scare is less effective against enemies that are less than level Y.

): Misty throw Whisper at an enemy, he deals X damage. Whisper has a chance to take procession of someone, charming in enemy for 10 seconds.

The charm is less effective against enemies that are less than level Y.

): Every 10 seconds, Misty dodges a skill by slinking into the shadows. She counters by sneaking onto to enemy lines and whacks the enemy that attack her with Whisper.

The blind is less effective against enemies that are less than level Y.

Anytime any of her allies are scared, their scared debuff is converted to a stack of hardy.

The conversion is less effective towards allies less than level Y. 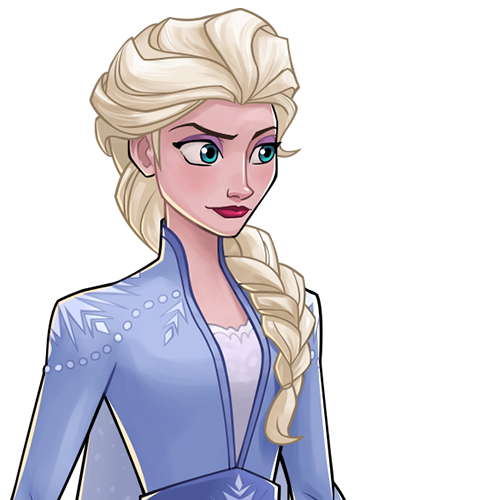 Campaign: City of Misfits: Ever since Misty and Whisper have arrived in the city, Misty was worried that people would be terrified of her because of her heritage. Turns out, they were all like her. Everyone had a story how they stand out from a crowd and how they were ostracized for it. One in particular intrigued Misty, a young woman with ice powers named Elsa. Misty was told of how she was once feared because of her magic. Knowing a thing or two about being feared and hated, the young boogiewoman feels attuned to the snow queen. After all what goes better with cold than dark. They both venture forth and find any other misfits that were either mistreated or casted out in their worlds.

Star Power: Misty is imperivious to freeze. She will gain Y tenacity if an enemy tries to freeze her

Campaign: See No Evil: Misty and Tera could not be any different. One being the cynical, snarky daughter of the Boogieman and the other being the cheery, positive, daughter of Mother Nature but they are best friends nonetheless. Because Tera saw her as more than the nightmare queen and gave her a chance. Now, that Tera was in a new place where villains are aplenty, she decides to befriend some of them seeing that no one is truly evil. Misty and Whisper, knowing this was clearly a bad idea, decides to go with the little spirit of spring so that Tera doesn’t get herself into trouble or worse.