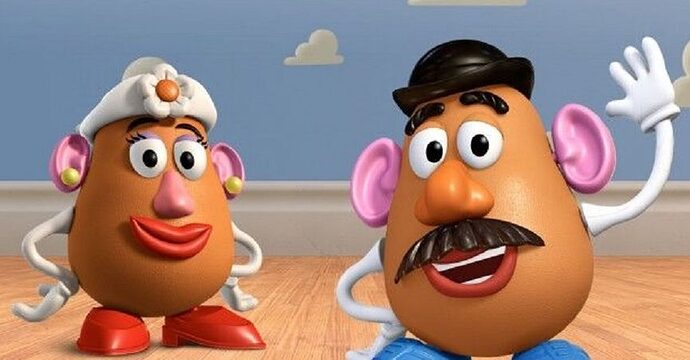 “You saved their lives? Oh, My Hero! And they’re so adorable! Let’s adopt them!”
Stars:

White Skill: My other eye

Normal
Mrs. Potato Head takes our her eye and points in towards her enemies dealing X damage, Mrs. Potato Head Studies the enemies for 10 seconds, then she puts her eye back in.

: Normal
Mr. Potato Head grabs 3 tortilla’s and throws them, each tortilla flies past all enemies once dealing X damage every time one passes.

Mr. Potato Head will stun the enemies for 6 seconds on the last thrown tortilla.

Blue Skill: Out with the old and in the new

Fantastic
Mrs. Potato Head grabs Mr. Potato Head’s old hat and replaces it with a new one, the new hat gives Mr. Potato head confidence which gives him a shield that blocks X damage for 8 seconds and a 50% speed increase for 6 seconds.

Every time Mr. Potato Head uses a normal damage attack it has an 80% chance to crit.

When enemies are studied Mr. Potato Head will heal Z hp over 5 seconds

Campaign: Andy’s Coming!
Description: Mr. & Mrs. Potato Head and Woody must work with other Toys to defend Andy’s Room
Allies: Buzz, Rex, Slinky Dog
Disk: “Toy Masters”
Star Disk:
When Mrs. Potato Head performs “My Other Eye” Mr. Potato Head will gain a 5% damage increase permanently (+5% every star)
“My other eye” now has a 60% chance to stun all enemies for 8 seconds
Stun has a chance to fail against enemies above level X

Campaign: Working Together
Description: Mr. & Mrs. Potato Head and Miss Piggy find themselves stuck on what to eat. Can they decide on what they’re gonna eat or skip food all together.
Allies: Disgust, Goofy, Mickey
Disk: “Bad Girls”
Star Disk:
“Take Extra parts” Now gives Mr. and Mrs. Potato Head a 10% speed increase (+10% every star)
“Out with the Old and in with the New” now deals X more damage