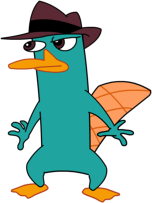 Perry is a secret agent, but poses as a platypus. But in this glitch fest there is not time for Perry to hide.

Entrance: Perry walks in like a normal Platypus, when in position he stands up and puts his hat on

Victory: Perry grapples onto the ceiling and goes off screen, then he slowly comes on screen from the top with grappling hook in hand

Defeat: Perry’s hat falls off as he turns back to a normal platypus, falling over

Normal
Perry grabs a smoke bomb and throws it beneath his feet. This makes Perry invisible for 12 seconds and the smoke bomb deals X damage to nearby enemies.

If an enemy has precise while Perry is invisble he gains X armor and takes 50% less damage from all sources for the duration of his invis.

Normal
At the beginning of each wave Perry flies in onto enemies, on landing Perry stuns all enemies for 8 seconds and deals X damage to the three enemies closest to Perry.

If all enemies take affect to Perry’s stun Perry pulls out a pair of binoculars and points it towards all enemies, Perry studies all enemies for 12 seconds and deals X damage.

Normal
Perry swings through all enemies dealing X damage and Perry gains 3 stacks of hardy and gains X energy. When Perry lands he energizes himself and all allies for 12 seconds.

If enemies are studied, stunned or frozen while he performs this skill he gives all enemies 3 stacks of weakness for 8 seconds and gains X armor.

When Perry falls below 0 Hp he revives himself, healing himself for X Hp and is invincible for 6 seconds

Invincibility has a chance to fail on enemies above level X

Perry gains X max HP and distracts enemies for 6 seconds after landing with “Perry Hop”. If Perry falls below 20% Max HP while distracting he gains invincibility for 7 seconds and instantly removes the distract.

You're not just a platypus?

Perry The Platypus and Phineas and Ferb - Hero Concept
At the beginning of each wave Perry silences the three enemies with the most reality for 6 seconds, after their silence Perry and allies gain a 40% movement and attack speed increase

Which friendship would you use

Please give feedback, things you dont like and want to be changed etc

Epic! Needs to be on Disney Heroes!

I like this concept Perry needs to be inthe game

I just have a question.
WHY DOES HE NOT HAVE A FRIENDSHIP WITH DW???

Yeah that would have probably been better, i’ll switch Scar with DW