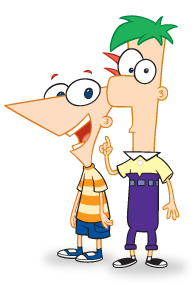 “Ferb, I know what we’re gonna do today”
Stars:

Entrance: Phineas and Ferb run into battle, when in position they grab a tool box and high five.

Victory: Drums appear out of thin air in front of Phineas and Ferb, they both grab a wrench and start playing the drums.

Defeat: Ferb walks off screen, Phineas stomps angrily on the ground and crosses his arms.

Passive: There is a 50 50 split that either Ferb or Phineas will toss a tool from their toolbox to an ally

Ferb: If Ferb throws the tool to an ally they heal for X hp and gain X tenacity

Phineas: If Phineas throws the tool to an ally they heal for X HP and gain X basic damage for 2 seconds

Active: Phineas points at the enemys and Ferb whistles, 5 Phinedroids run across all enemies stealing X HP from each enemy and steals X energy from each enemy, Hp and energy is given to all allies.

2 Ferbots run infront of allies gaining “distract” for 6.5 seconds. Ferbots hit enemies dealing X damage and each hit gives the Ferbots X energy, when a Ferbot reaches X energy they heal the weakest ally for X hp and applies 2 stacks of hardy to the weakest ally.

Ferb rips off all of his clothes, when Ferb’s clothes are gone Ferb will be in a hula skirt and start dancing for 6 seconds with the faint beat of “Backyard Beach” playing. Each second he dances he heals allies for X Hp and increase their tenacity by X each second.
(Tenacity increase lasts for 8 seconds, doesnt start counting down till Ferb finishes dancing)

Phineas claps for Ferb to cheer him on, he claps every second for 6 seconds as well. Each clap increases allies attack speed by 15% for 10 seconds. (The timer doesn’t start going down until Ferb stops dancing and Phineas stops clapping.)

Phineas tosses a hard hat to all allies, each hard hat gives all allies a shield that blocks X damage. Each hard hat also gives the two allies who received the most debuffs in a wave 3 stacks of hardy, most debuffed allies reset every wave. (cannot stack)

When allies stacks of hardy are gone they gain X max HP and heal for X HP.

Every ally that gets buffed by Phineas and Ferb or any Ally gain invincibility for 3 seconds and gain an extra random buff for 6.5 seconds (cant stack) (the buff can be X basic damage increase, 30% speed increase, X reality, X tenacity, X armor, X max hp)
Extra random buff has a chance to fail on alles above level X

Red Skill: Yes, yes I am

When Ferb performs “Backyard Beach” he now silences enemies for 14 seconds, if any enemies are below 20% Hp Ferb instant kills them, the HP the enemies had is transferred to HP for all allies.

Phineas and Ferb and Dr Bunsen Honeydew and Beaker
Whenever the first ally falls to 0 HP Phineas and Ferb bring them back to life, when ally is brought back they heal X HP and gain a 100% movement and sttack speed for 8 seconds

Let me know what you think, improvements etc.

What team would you use Phineas and Ferb in?

Which Friendship would you use?

I’ve decreased it to 5% per star. Besides that opinions on this concept?

I think it’s interesting. The descriptions of the skills are good and creative. I just think that some of the skills are kinda op, like, 6 stacks of Hardy to all allies at once? That’s too much, specially in a skill that can be used multiple times and with no limit for the stacks.

Also, this text is usually used to describe what the Star effect does. This feels kinda out of place here, but it’s not a major problem. Overall, good concept!

like, 6 stacks of Hardy to all allies at once? That’s too much, specially in a skill that can be used multiple times and with no limit for the stacks.

i have fixed this, but for the other part im confused?

Whenever the first ally falls to 0 HP Phineas and Ferb bring them back to life, when ally is brought back they heal X HP and gain a 100% movement and sttack speed for 8 seconds

Like, is that an extra effect? if so, it should be added to the star effect

In the template there is the disks main function and the star effect, so wait is there only supposed to be one function within the disk and then the memory (star thing) just increases it? If so then i’ll go fix everything

Yeah, that’s basically it. The text is a summary of the function, but disks can have more than one effect.

So is mine still fine? If so i’m most likely not going to change anyhting but for future concepts i’ll keep this in mind