This is my submission for the Hollywood Studios Concept Contest! 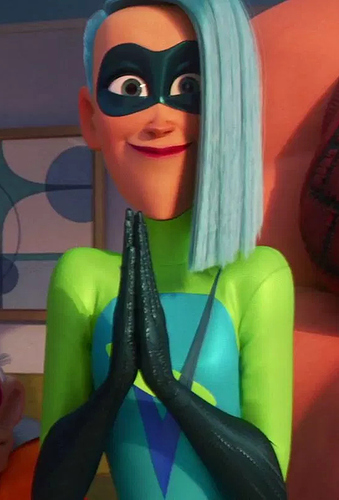 “I felt like an outcast before. But now, with you being you, I feel like…yay, me.”

The newest hero Voyd uses her portal-creating powers to send damage back to enemies that seek harm to her allies.

Role: Damage
Position: Middle
Trial Team: Red
Entrance: Appears from a portal
Victory: Gives a thumbs up
Defeat: Hides head in arms in embarrassment
Attack: Creates a portal which tosses a random object at an enemy

White Skill: Interdimensional Showcase (Normal Damage)
Voyd creates multiple portals which throw 10 heavy objects at the enemies, dealing X damage per object and silencing them for 6 seconds or extending their silence by 6 seconds.

Green Skill: Return To Sender
Voyd creates a portal for her and the frontmost ally, granting both of them Reflect for 7 seconds. Heroes with this Reflect will negate 100% of the damage received to them and will return 75% of damage back at the enemy who dealt the damage. This damage cannot be avoided by dodges. Projectiles reflected by this will be 200% stronger.

The bonus damage is reduced against enemies above level Z.

Blue Skill: Portal Trap (Normal Damage)
Voyd creates a portal under a backline enemy, causing them to fall and land in the frontline, receiving X damage and become stunned for 7 seconds.

If there is a shielded enemy then Voyd will target them and this will deal X more damage.

Purple Skill: Unique Power
Voyd gains X skill power each time she takes damage while having “Reflect”. She carries 50% of this buff when carried from wave to wave.

Voyd passively gains Z evasion. Evasion increases the chance of dodging a disable without affecting them.

When an enemy is knocked back or pulled forward, Voyd gains Z basic damage. Voyd knocks back enemies every 3 basic attacks.

She was one of my favorites! Great concept! I love her basic attack

Sorry for the revive, I came here from the voting page and wanted to share how much I love this concept

Reviving is always ok if it is useful. It is this time.

she could be the next sing in hero

Dang it I mean sine in