Happy New Years Eve everyone! Enjoy this concept on a time-based character! 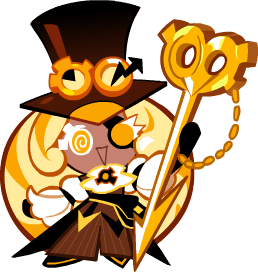 “Why change time? Because I can and it’s fun.”

The chaotic and powerful Timekeeper Cookie wields her Sonic Embroider to plunge the enemies into an era of disarray.

White Skill: Time Breaker (Fantastic Damage)
Timekeeper Cookie opens a time rift in the middle of the enemy lines with her sonic embroider. Enemies nearby the rift are dealt X damage and are knocked back or further depending on where they were standing. Enemies knocked further are stunned for 10 seconds and enemies knocked back have their attack and movement speed slowed by 60%. Enemies below 40% of their Max HP when the time rift was opened will be instantly KO’d.

Green Skill: Phased Through (Fantastic Damage)
Timekeeper dodges an attack or skill and counters by teleporting right through them, dealing X damage to enemies between them, dealing damage equal to 50% of their missing HP to the initial target, and stunning them for 10 seconds. The stun cannot be reduced by tenacity and cannot be dodged, evaded, or blocked by “Hardy” or passives. Timekeeper can dodge once every 15 seconds.

The bonus damage and the stun’s duration is reduced against enemies above level X.

Blue Skill: Former Glory
Once per wave, when an ally is KO’d, Timekeeper Cookie uses chronokinesis to revive them. They will revive with X HP and gain the last 3 buffs that they received throughout the battle. Timekeeper Cookie will also use this on herself when she is KO’d.

Allies will also re-preform their entrance animation, including skills that they come with.

Purple Skill: Reality Trip
When an enemy is stunned, they lose X reality. Enemies with an armor or a reality debuff deal 50% less damage.

The damage reduction is reduced against enemies above level X.

Every 3 times an enemy is disabled, Timekeeper Cookie gains 25 reality negation, up to a max of 125. She retains this buff when carried from wave to wave.

Gaining reality negation from disables has a chance to fail against enemies above level X.

Apologies if its another CR character despite me saying that I was gonna take a break from them…This one I had in my notes for a while that I was intending on releasing today.

Anyways, another concept should release tomorrow based on BFDI. Stay Tuned and have a Happy New Year!