This is the third concept of the Coco series with @Imagineer_V. Hope you enjoy! 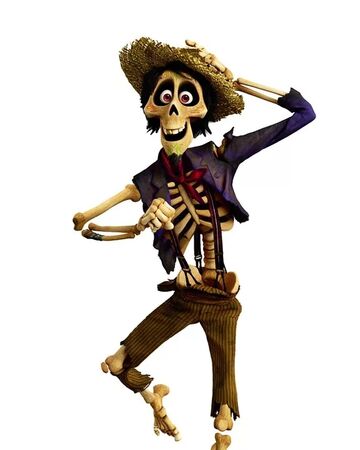 “This is why I don’t like musicians; They’re a bunch of self-important jerks!”

Hector is a charming trickster in the Land of The Dead who heals and protects his allies with his disguise and skeleton detachability.

Role: Support
Position: Back
Trial Team: Yellow
Entrance: Walks into position from the marigold bridge.
Victory: Gives a thumbs up to allies.
Defeat: Trembles as he nearly fades away
Attack: Throws his arm which comes back to him like a boomerang

White Skill: Marigold Blessing
Hector grants the weakest ally his blessing, healing them for X HP, increasing their armor and reality by 75%, granting them X skill power, and 300% attack and movement speed for 10 seconds.

The armor and reality boosts have a chance to fail against enemies above level X.

Green Skill: Charming Disguise
Hector disguises himself as Frida Kahlo and charms the enemy with the most skill power for 12 seconds. While charmed, the enemy gains X basic damage.
When the charm expires, the basic damage is redirected to Hector and his allies.

Blue Skill: Detachable Arm (Normal Damage)
Hector’s Skeleton arm grabs the back most enemy, dealing X damage, stunning them for 6 seconds, and pulling them to the frontline.

Buffs on allies cannot be removed from any source.

Miguel (189)
City Festival
Critical Ally Invincibility
+X Basic Damage to Yellow Team allies
• When an ally falls below XX% (+10 per star level) of their Max HP, they become invincible for 5 seconds. This activates once per wave.
• Allies deal X more damage from all sources while invulnerable.

I love this concept! I like how he throws his arm at a enemy

Why though? The concept is perfect.