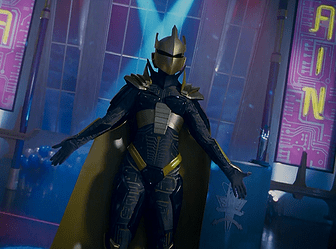 Quote: “My dear Commander, who said anything about killing you?”

White Skill - Painful Transformation - True Damage
Royal Pain fires the Pacifier at the strongest enemy, dealing X damage and immobilizing them for 5 seconds by transforming them into a baby.

Green Skill - Stitch ‘Em - Normal Damage
Royal Pain summons her henchman Stitches to run through enemies, dealing X damage to each one, and carry the weakest enemy to the backline.

Red Skill - Uncle!
For the first 7 seconds of each wave, Royal Pain is invincible, and her attack speed is increased by 75%.

Friendships:
Royal Pain + the Evil Queen
Campaign: Ambitions, Ambitions - Royal Pain wants to be the fairest in the City, but everything the Magic Mirror says goes against her evil nature. With the Evil Queen’s aid, she embarks on a journey to take over the City, finding she doesn’t need to be the fairest, or fair at all for that matter.
Disk: City Podium
Disk Memory: Each time Royal Pain performs her “Stitch ‘Em” skill, enemies that take damage from Stitches have their attack speed slowed by 35%.
Disk Power: Z energy gain, Z max HP
Allies: Dr. Drakken, Merida, Randall Boggs

This concept is absolutely incredible! Royal Pain is absolutely one of the most underrated Disney Villians out there, and all of the skills are well named too, especially “Uncle!”

I’m glad you like my idea for this concept!

The damage type for “Stitch Em” & Techno Strorm are unclear, so please specify them. You also forgot the allies for the friend campaigns. With the “strongest” or “weakest” enemy, you could just say the enemies with the most or least HP.

With the “strongest” or “weakest” enemy, you could just say the enemies with the most or least HP.

Differentiating hero strength and HP counts are different. Strength determines how powerful heroes are, and HP determines how long heroes can last in a battle.

Bottom line: I see what you mean…