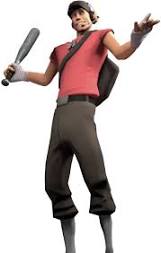 Description: Jeremy, AKA the Scout has one mission and one mission only, get in, get kills, and get out. Utilizing his speed, Scout will be an unstoppable force against the onslaught of creeps
Quote: “Grass grows, birds fly, and brother, I hurt people.”
Stars: 3
Trial Team: Red
Entrance: Scout will jump into the battlefield and strike a pose before getting ready for battle
Victory: The Scout will laugh uncontrollably at the enemy team’s defeat
Death: Scout’s teeth will fall out and he’ll become bruised 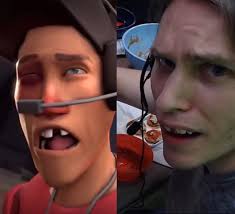 (Yes your eyes do not deceive you, that’s Jerma. The image of Scout though is from Meet The Medic)
Role: Backline Damage

Basic Attack: Scout will shoot his pistole at the closest enemy. Scouts attack speed and movement speed is always 5% faster

White skill: Bonk! Atomic Punch
Scout will drink his Bonk! Atomic Punch drink and become invincible for 15 seconds, while Scout is invincible his attack and movement speed is increased by 100%. Scout will move to the closet enemy and start fighting in the frontlines with his baseball bat, he’ll stay in the frontline until the skill is used again in a wave. When used again in a wave Scout will move back to his original position

Blue skill: Crit-A-Cola
Scout will drink a can of Crit-A-Cola, giving him a 100% chance to deal crit damage of any kind for 10 seconds

Red skill: I’m Running Circles Around Ya!
Scout will have his movement speed and attack speed increased by 20% for every KOd enemy on the battle field, this resets at the end of each wave

Scout and Heavy
Disk: Fat Scout
Scout will have his health bar increased by 10% for every KOd enemy on the battlefield. This resets at the end of each wave
Heavy recently got a shotgun of his own and tells Scout he has a desire to be more like this. Scout finds this idea ridiculous but must teach Heavy the ways of the Scout or Heavy will beat him up
Allies: Huey, Dewy, and Louie MegaVolt Minnie Mouse