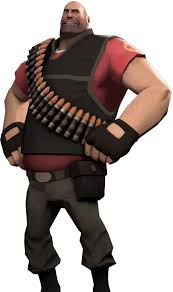 Description: This is Heavy weapons guy, he is strong man and has big weapon. Now he’ll use big weapon to make creeps wish they never decided to “purge errors”
Quote: “All of you are dead!”
Stars: 3
Trial Team: Red
Entrance: Heavy will walk in welding a pair of boxing gloves, laughing at the excitement of battle
Victory: Heavy will do the Kakotski Kick
Death: Heavy fall to a knee in defeat
Role: Frontline Tank

White skill: This Is My Weapon: Fantastic Damage
Heavy will pull out his beloved mini gun, Sasha, and begin firing her until his energy bar fully depletes. Heavy will deal X damage with each shot and will heal himself X health over time for 10 seconds when the skill starts

Green skill: POW!: Fantastic Damage
Heavy will shoot the closest enemy with a finger gun, dealing X damage to them and increasing himself and all allies attack and movement speed by 100% for 10 seconds

Blue skill: Meet The Sandvich
Heavy will eat his sandvich, increasing his health bar by 20% and healing for 50% of his max hp. Heavy will also have his basic attack power increased by 20% and have a 50% to deal crit damage of any kind for 13 seconds

Purple skill: Get Behind Me
The player will choose an ally for Heavy protect at the start of each wave, the ally protected by Heavy will take 20% less damage from all sources, the amount of damage the ally will take will be translated into basic attack power for Heavy. This resets at the end of each wave

Heavy and Medic
Disk: Get Behind Me Doctor!
Heavy will deal 30% more damage to the most wanted enemy
Heavy notices Medic is having trouble against the creeps and offers to accompany the doctor on his next patrol
Allies: Elatagirl Minnie Mouse Heiro

Heavy and Mr Incredible
Disk: Best Heavy Weapons Guy
Heavy will heal all allies X health with his basic attack
Heavy feels Mr Incredible is taking his place as the big strong man on the team, so he attempts to one up him every way he can
Allies: Sniper Solider Dash

Noice! I love the skills.

That from tf2 meme

Ohhhh ok, my mistake, I’m sorry. I’m not super involved in TF2 but I love the characters which is why I did concepts for them