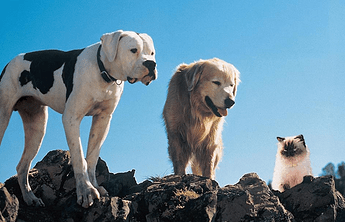 The wise golden retriever, the childish American bulldog, and the cocky Himalayan cat have arrived in the City with the forces of nature on their side.
Trial Team: Blue
Role: Midline Damage
Stars:

White Skill - Rock Catapult - Normal Damage
A mountain lion climbs on Shadow, Chance, and Sassy’s rock seesaw, and they jump to launch the mountain lion at the strongest enemy. The mountain lion will then damage that enemy for 3 seconds.

Green Skill - Bear Chase
Chance runs through enemies, leading a bear to chase him and damage enemies in the process.

Blue Skill - Porcupine Power
Chance chases a porcupine, sending it to damage the enemy with the most HP while also taking X damage himself. Afterwards, Shadow, Chance, & Sassy cannot attack for 4 seconds.

Purple Skill - An Incredible Journey
Shadow, Chance, & Sassy are invincible for the first 8 seconds of each wave. Each enemy that attacks them during those 8 seconds has their attack speed reduced by 10%.

I like the concept! Especially since i love these characters : D