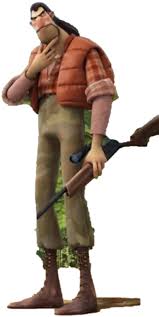 Description: Old Shaw, an expert marksman and a great threat during Open Season. Now using his excellent hunting skills to hunt down creeps, some might be mounted on his cabin walls
Quote: “Alright Lorraine. Let’s kiss this bear goodnight.”
Stars: 2
Trial Team: Yellow
Entrance: Shaw will recklessly drive his truck into battle, chuckling to himself as he does. He then climbs out of the truck before pulling out his rifle, Lorraine, and kissing her. His truck then disappears and Shaw cocks his rifle, ready for battle

(Best picture I could find)
Victory: Shaw will play Lorraine like an electric guitar

Death: Tar and feathers will fall from above Shaw, causing him to get tarred and feathered before screaming in horror
Role: Midline Tank

Skills:
Basic Attack: Shaw will shoot an enemy with Lorraine

White skill: Taxidermy Collector: Fantastic Damage
Shaw’s rocking chair will appear in the battlefield and so will his jackrabbit lamp. Shaw will then sit down in the rocking chair and turn of his lamp, scaring all enemies for 15 seconds and dealing X damage to them over 10 seconds

Green skill: Goldilocks The Bear
Shaw will pull out Dinklemin and taunt the enemy with the most buffs, scaring them for 10 seconds and stealing all there buffs, resetting there countdowns. If there is no enemies with buffs, Shaw will taunt a random enemy

Blue skill: Mounted On A Wall: True Damage
Shaw will pull out a deers antler and hit the closest enemy with it, dealing X damage and removing all buffs from that enemy, giving them to all allies evenly. Shaw will also scare the enemy for 10 seconds

Red skill: Only I Know What I’ve Seen
Shaw will gain X reality and X armor after damaging an enemy with “Taxidermy Collector.” Shaw will also become invincible for 10 seconds after KOing an enemy

Shaw and Sniper
Disk: Taking Up New Weapons
Shaw will gain a shield with X health at the start of each wave for the rest of the wave
Sniper upon meeting Shaw is utterly baffled by how insane he is, he’s way crazier than Solider! Shaw attempts to make friends with Sniper either way, over their love of guns. But Shaw has a different kind of love for his guns.
Allies: John Silver Scrooge McDuck Timon and Pumba

Shaw and Goofy
Disk: Anthropomorphic
Shaw will apply a random debuff for 15 seconds whenever he steals a buff
Shaw is horrified that all the animals in the City can talk. Giant Ants, Rich Ducks, and worst of all, a talking dog. Goofy is very confused, to his knowledge, he’s completely normal. Goofy attempts to help Shaw realize that the animals in the City aren’t too bad.
Allies: Flik Bolt Donald Duck