Hello forumers! I have been on a very long hiatus from concept-making, and I just thought up of some new concept ideas, so stay tuned for them throughout the week! 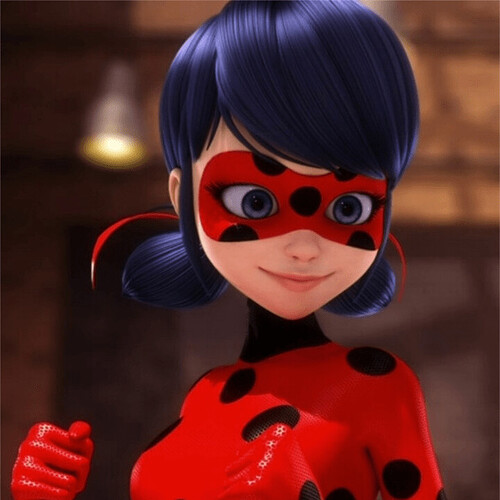 Quote: “In the daytime, I’m Marinette, just a normal girl with a normal life. But there’s something about me that no one knows yet, 'cause I have a secret.”

Description: Ladybug takes to the battlefield, with her yo-yo and lucky charms at the ready. By the time she’s done doing good, the enemy will be wondering what hit them.

Basic Attack: Ladybug chugs her yo-yo at an enemy.

Victory: Proudly looks up and smiles.

Defeat: Throws down her yo-yo and frowns at the enemy.

Ladybug pulls out her yo-yo, heals allies for X HP, and summons a random object to debuff enemies based on their Team Color.

Red Team: Ladybug summons a spray can and fires it at the closest enemies at an area, stunning them for 6 seconds and removing 3 active buffs.

Blue Team: Ladybug summons bath bombs and throws them in an area, causing enemies to have their Tenacity and Evasion reduced by 40% for 8 seconds.

These debuffs have a chance to fail if enemies are above level X.

Ladybug tosses her yo-yo at the enemy with the most energy, stealing 350 energy from them and dealing X damage to them.

The energy steal has a chance to fail if enemies are above level X.

Ladybug prepares to de-evilize the enemy with the highest HP, charming them and increasing their attack speed by 60% for 12 seconds.

Charmed enemies do not gain energy from this skill.

In addition to being healed, allies are now cleansed of all debuffs every-time “Lucky Charm” is used.

Ladybug also gains 40% Attack Speed for 7 seconds after using “No More Evil Doing!” When this activates, her allies’ Max HP is increased by 50% for the rest of the wave.

The max HP increase has a chance to fail on allies above level X.

Is Charged When: Charm is applied to 5 enemies

Ladybug recruits the help of Darkwing Duck, whom he needs his help to defeat villains who plan to take over the City’s recreations of famous landmarks, including Ladybug’s very own Eiffel Tower.

Ladybug and Cat Noir try to go on a lovely date in the city, but creeps get in their way and they meet many new friends along the way.

Enamour Enemies at the Start of Combat

Which Disk do you work on?

What tier do you rank this hero in?

I love your idea, it would be nice to implement it in the game.

Thanks very much! What parts of the concept were your favorite?