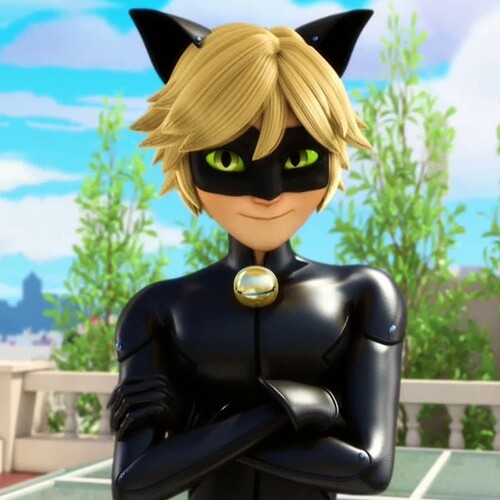 Quote: “Whoo-hoo! I thought I was going to have to save you from that girl’s claws. Get it? Claws? Hey, I haven’t even introduced myself. I’m Cat Noir.”

Description: Cat Noir uses his Cataclysm and beating pole to pack a punch on the battlefield. He really is the cat’s meow!

Victory: Holds his pole over his shoulders and winks.

Cat Noir conjures up a Cataclysm, and beats the floor, sending debris to all enemies and dealing X damage 6 times to each enemy.

Cat Noir jumps at the closest enemy with his pole, dealing X damage, and applying Shatter to them for 6 seconds.

Shattered enemies take 8% of their Max HP as True Damage each time they are dealt Fantastic Damage from an enemy. Skills that deal damage over time can only trigger Shatter once per second at max. The Shatter has a chance to fail against enemies above Level X.

Cat Noir dodges a melee attack and counters his attacker, dealing X damage to his attacker. Cat Noir can only do this every 7 seconds.

After Cat Noir uses “Pole Punchout” he gains 100% Attack Speed and X Basic Damage for 14 seconds. Cat Noir is also Energized during this time. While Energized from this skill Cat Noir gains 85 extra Energy each time he performs a basic attack.

Cat Noir also Stuns enemies for 3 seconds when he damages them with “Cataclysmic Crush”. Cat Noir can only Stun enemies this way once every 4 seconds. Stun has a chance to fail against enemies above Level X.

Is Charged When: Heroes use 3 White Skills

Bolt thinks Cat Noir is an assistant of the Green Eyed Man, and recruits his help to find his hideout in the city. Cat Noir, however, has other plans.

Jay is looking very afraid that creeps took her girlfriend, Nya, and his master, Wu. He seeks the help of Cat Noir, and the two find out that these “creeps” are more with what they bargained for.

What tier do you rank this hero in?

I would love to see it in the game.