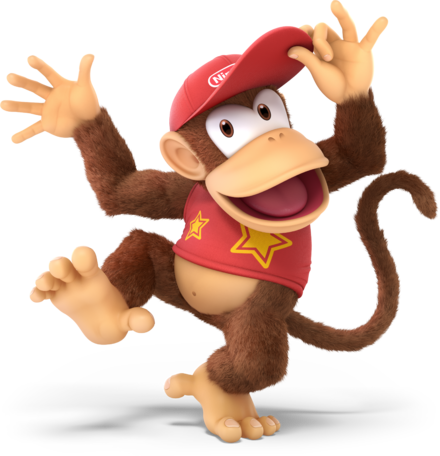 Entrance: diddy kong flys down into the battlefield with his rocket barrel pack

Victory: diddy kong tips his hat and puts his hand on his hip while smiling

Defeat: diddy kong tries to fire his peanut popgun but it backfires and explodes leaving his face covered in soot.

Diddy kong eats a banana which heals himself for X amount then he tosses the peel near the enemy team, a foe will be stunned for 5 seconds whenever he steps on the banana peel.

Diddy front-flips to the enemy who has dealt the most damage to him and kicks that enemy before hopping back to his position, this skill deals X damage to the foe as well as knocks them back.

“Rocketbarrel rush” now steals 1 random buff from any random enemy he passes through on each trip and gives it to a random ally with it’s duration refreshed.

If an enemy is blinded by diddy or another ally, they become 100% weaker against crits and supercrits until the blind wears off.
+X damage to “Monkey flip”
+X skill power
+X max HP

Diddy kong now heals himself for X amount whenever “Rocketbarrel Rush” crits against an enemy.

You forgot to specify the type of damage in the attacks, and that friendship disks have 2 effects. Other than that, looks like a pretty solid concept to me

These are the emojis most use for the types of damage skills have. Disk Power is a simple X, Y or Z level upgradeable effect. But yes, good concept. I would use brackets in between the skill descriptions also. To make it look more organized.

Impressive donkey and didy in the same day