The leader of the bunch (unlikely concept) 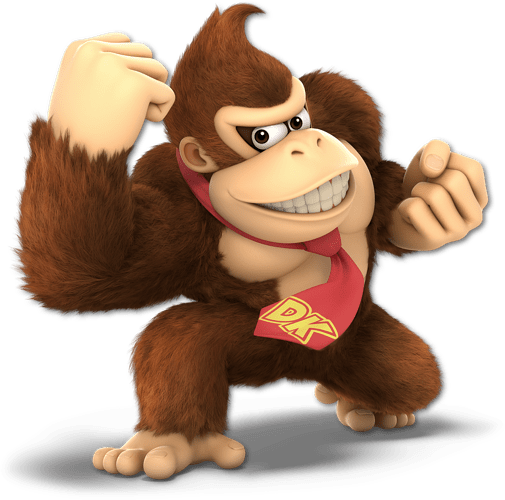 Entrance: Donkey Kong bursts out of a barrel and poses

Victory: Donkey Kong gives a thumbs up to the camera

Defeat: Donkey Kong eyes bulge out of his head in a cartoony fashion before he then falls on his butt and scratches his head

Donkey Kong becomes invincible and starts to wind up his fist for 10 seconds, he then throws a massive punch towards the nearest enemy, dealing between X to X damage depending on how long he winds up his fist for, stunning the foe for 5 to 10 seconds and knocking them back.

When not on auto, the player can end his winding-up early by tapping his portrait.

Donkey Kong headbutts the nearest enemy, dealing X damage to the foe, stunning them for 5 seconds and knocking them back. If the enemy is already stunned, the stun duration is increased by 4 seconds.

This move deals more damage per the amount of damage that the enemy has taken throughout the battle.

Donkey Kong pulls out his coconut gun and fires it, the coconut deals X damage to the target foe and then it bounces to other foes to deal the same amount of damage.

Each hit has a 70% chance to stun each enemy for 5 seconds.

When Donkey Kong goes under 30% of his max HP, he becomes invincible for 5 seconds and also gains X increased attack and skill power for the rest of the wave.

Red: King of the jungle

“Charged punch” now deals X to X more damage when donkey kong is below 65% of his health.

Donkey kong’s green skills cooldown is now reduced by 100% whenever he is debuffed by any source.

Whenever an enemy is stunned by donkey kong or an ally, 2 stacks of hardy are stolen from them and given to the ally who stunned the enemy in the first place.

You forgot to specify the damage that his skills deal(Normal, Fantastic, TRUE). In the first skill, you might want to use another letter to represent the second value of damage. And in the Timon disk, I think that stun can’t steal hardy, since hardy blocks stun

This is a good concept