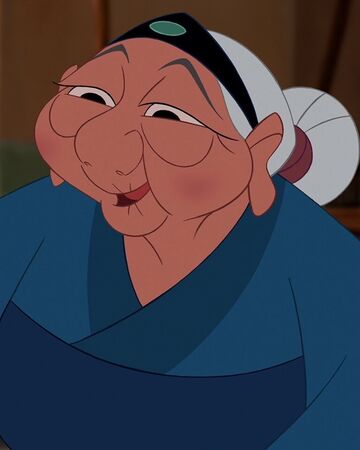 Armed with her lucky crickets and honorable items, Grandma Fa damages her foes.

Entrance: Walks in and pulls out Cri-Kee

White Skill: A Lucky One

Passive: Instead of having a basic attack, Cri-Kee strums a tune with his legs, healing Grandma Fa and all allies for X Hp.

Active: Grandma Fa holds up Cri-Kee and covers her eyes with her hand. She then walks between enemies, bumping into them which deals X damage. This also gives all allies X Reality. Grandma Fa does this until her energy runs out.

Grandma Fa puts on her jade necklace, healing her for X HP and charming the closest enemy for 6 seconds. She then throws the necklace at the charmed enemy, dealing X Damage.

Grandma Fa puts on her Pendant healing herself for X HP. This also changes Grandma Fa’s Skill Power and Basic Damage to be equal to the stats of the allies with the highest Basic Damage and Skill Power.

Grandma Fa is invincible for the duration of A Lucky One. Grandma Fa gains X Armor each time she is healed from any source.

The armor gain is less effective if Grandma Fa is above level X.

Whenever Grandma Fa would gain a a shield from any source, she instead becomes invincible for the same duration as the shield. Grandma Fa is immune to all crits.

Crit immunity can fail if the enemy is above level X

Don’t forget you can always request a concept
Here

First off, i Looove this concept. I think it could be cool if the cricket gives immunity to crits like T&P or when she uses her white skill she walks across thw screen through the enemy and their projectiles either fail or redirect back at enemy lines. But that may make her quite op. Just some thoughts. I really enjoyed your concept!

I’m glad you enjoyed it.

This is very good, but the red skill is just op.

Red skills should be op tho