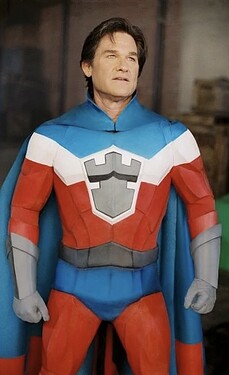 Fear not, for the Commander is at the City’s aid. The muscle power of Steve Stronghold, real estate agent by day, hero by night, is unparalleled by the ordinary creep, serving as the powerhouse your team needs.
Trial Team: Blue
Role: Frontline Damage
Stars:

Animations:
Entrance: the Commander lands into the battlefield by a fire-pole and cracks his knuckles.
Victory: An office chair appears beside the Commander, who spins it around to reveal a present as he smirks.
KO: the Commander falls to his knees, feeling exhausted.

White Skill - Ground Pound - Normal Damage
the Commander stomps his foot, sending rubble crackling in the enemy lineup’s direction to deal X damage to enemies and stun them for 6 seconds.

Blue Skill - Respect the Emblem
the Commander stands up to the enemy, his emblem glistening. For 8 seconds, he takes all damage and de-buffs dealt to his allies.

While performing this skill, de-buffs applied to the Commander are canceled once the 8 seconds are over.

Friendships:
the Commander + Will Stronghold
Campaign: Parental Guidance - Despite his son Will being in the City longer than he has, the Commander takes it upon himself to show him the ropes of hero duty in this strange City. For Will to convince his father that he can hold his own will not be easy.
Disk: the Power of Family
Disk Memory: the Commander gains X HP each time an enemy takes True Damage while he is performing his “Respect the Emblem” skill.
Disk Power: Z energy gain
Allies: Mother Gothel, Milo Thatch, Honey Lemon

the Commander + Audrey Ramirez
Campaign: Headquarters Renovation - Just when the Commander is called to duty, the entrance to his secret headquarters jams on him. He calls for Audrey to fix the passageway whilst appearing mild-mannered, but little does he know that Audrey can already tell he’s one of those superheroes. How? She’s never been called to repair a cabinet.
Disk: Identity Concealed
Disk Memory: the Commander steals X energy from the enemy targeted by his “Weight Throw” skill.
Disk Power: Z max HP
Allies/the Commander’s Backup Crew: Frozone, Hercules, Kim Possible