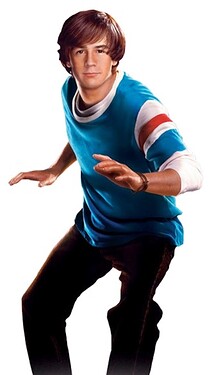 Animations:
Entrance:
Will descends into the battlefield using his flight powers.
Victory: Will rushes behind a room divider and reappears, having changed into his Sky High gym uniform.
KO: Will is launched offscreen by a spring mechanism similar to the one in the Sky High gym floor.

White Skill - Stronghold Shockwave (True Damage)
Will leaps into the air and punches the ground, creating a floor-shaking shockwave that stuns the three closest enemies for 5 seconds.

Green Skill - Hero Support
Will strikes a heroic pose, granting himself shield and increasing his allies’ attack speed by 25% for 4 seconds.

Blue Skill - Bus Stop
Will calls for Ron Wilson to ram through enemies with his rocket bus, knocking back and dealing heavy damage to all enemies.

Purple Skill - Sky’s the Limit
Each time Will uses “Stronghold Shockwave,” an additional enemy is stunned. If all enemies have already been stunned before, the stun count resets to three at once and goes from there.

Red Skill - Pacified
At the start of each wave, Will instantly steals X energy from the closest three enemies and shares it with the weakest ally.

Unfortunately, due to Topic Setup problems, I cannot display an image of the Hero. Any help in doing so is more than welcome.

This has to do with Trust-level. If you want to post pictures, I would advice you to “read” (scroll) through some topics and like a few posts to gain “Basic”

If all enemies have already been stunned before, the stun count resets to three at once and goes from there

This can be worded more easy: If enemies are already stunned, the stun will be extended by X seconds. (Seconds are mostly not variable, but okay)

Each time Will enters the battlefield per wave

Is this more than one time?

Is this more than one time?

Yes. You know how each level has three stages? Those stages are called “waves” in the game.

But the way you worded it was:

Each time Will enters the battlefield per wave

Which implies that Will can enter the battlefield multiple times in one wave.

A better wording would be “At the start of each wave…”