The hecklers from the balcony (likely concept) 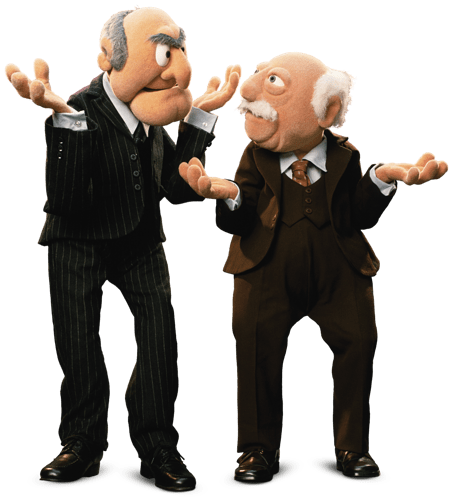 “Why do we always come here? I guess we’ll never know.”

Statler and Waldorf heckle foes from their beloved balcony

Entrance: their balcony appears and then both Statler and Waldorf run in and take their seats (they will remain stationary in the backline)

Victory: the two laugh at the foes

Defeat: they duck underneath the balcony as they then raise white flags from beneath their seats

Statler and Waldorf heckle the most wanted enemy which inflicts “heckle” to the enemy. when the target enemy is inflicted with “heckle” their white and blue skills will be 100% less powerful against the duo.

Statler and Waldorf both take out pistols and shoot them at two nearby enemies, dealing x damage to the two foes but instantly defeating one of the two enemies when they are under X amount of their max HP.

All attacks done to “heckled” enemies now have a 50% chance to crit against the enemy.

“Out of it’s misery” now halves the shields of the two target enemies when they get shielded by any source.

Statler and Waldorf as well as all other allies are immune to disables dealt by “heckled” enemies.
+X damage to “out of its misery”
+X armor
+X skill power

Statler and Waldorf/Fozzie
Origin of the heckle
more “heckled” inflicted

“Heckled fools” now inflicts a 30% less powerful “heckled” to two other foes next to the original targeted foe.

Statler: Why should we come?

Statler: It could be worse.

Statler: That bear could be in it.

Blue: out of it’s misery

Yeah, that was me who wanted Cruz.

SOMEONE, (Who I shall not name) deleted them all and I added them back and added my request.