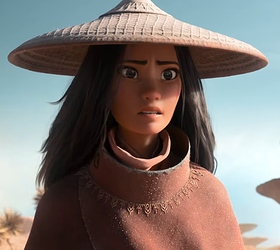 Source: Raya and the Last Dragon

The warrior princess of Kumandra slashes enemies to ribbons with her sword to help fix a broken city.

I have never seen Raya and the Last Dragon (I want to),But this Concept was well done I do like the Genie and Moana friendships. (I also looked at your friendship campaign and I loved it!)