This Concept will Initiate You Into Oozma Kappa! - Squishy(Likely Concept)

As some of you might have noticed, I like making concepts of characthers that either never had a concept made on them before, or that I really want to ellaborate my own ideas for, and Monsters University is full of the former! I present to you yet another Scare support! Feel free to leave any feedback! 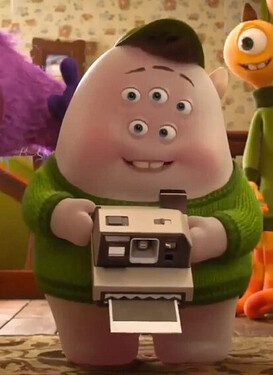 Position and Role: Frontilne Support Hero
Trial Team: Yellow
Mastery Collections: Support, Healer
Entrance: Walks into position. If he unlocked his green skill, he will walk in with a black cloak, initiate the chosen ally and then take the cloak off.
Victory: Dances 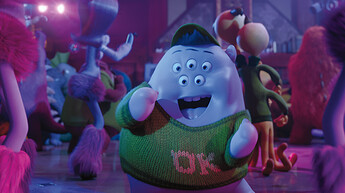 image3500×1967 789 KB
Defeat: Looks at the ground in shame
Basic Attack: Slaps nearby enemies
Description: Squishy surely is cute, but be aware! If you lose sight of him, he will most likely Scare you, and if you don’t take him out quickly, he will make his allies extremely powerful members of the Oozma Kappa fraternity!
Quote: “I’ve never stayed up this late in my life!”

Squishy sneaks into the middle of the enemy lines, and then makes a dead stare at the enemies, Scaring them for 8 seconds, then, Squishy celebrates, granting to all allies and himself +50% Attack Speed for 10 seconds and X Skill Power. Then, he goes back to his position. Squishy cannot be damaged or debuffed while performing this skill. 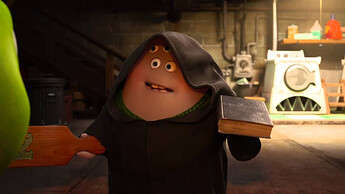 image1280×720 102 KB
At the start of each wave, the player chooses an ally for Squishy to initiate into the team. If on auto, Squishy will initiate the ally with the most Skill Power. Then, Squishy grants “Initiated” to that ally. Initiated allies gain X Skill Power, +50 Crit Damage and +200% Reality Negation. “Initiated” cannot be removed or stolen, and passes from wave to wave. An allie cannot have more than 1 “Initiated”. (The icon of “Initiated” is the Oozma Kappa Symbol). If there are no allies to Initiate, Squishy can Initiate himself.

Say Scream!
Squishy takes a good picture of his team and shows to his allies, granting to him and his Allies X Armor and Reality, and 1 Stack Hardy to each. “Initiated” allies also gain X Skill Power.

The Greatest Fraternity:
Buffs on “Initiated” allies have double value, and the length of debuffs on them can only be a Maximum of 4 seconds.
The debuff length reduction might fail in allies above level Z.

Oozma Kappa!
Ritual of Initiation can now grant “Initiated” to up to 2 allies.
Whenever Squishy or his allies Scare or damage a Scared enemy, they are healed for X HP.
“Initiated” allies cannot be disabled by Scared enemies.

Is Charged in Battle When: Scare is applied to enemies 5 times

Squishy + Sully & Boo
Campaign: Sweet Child: Sullyvan and Squishy try to talk about what happened in their lives after university, but Boo keeps interrupting them because she really liked Squishy.
Allies: Jessie, Jim Hawkins, Mike Wazowski
Disk Name: Child Size Oozma Kappa Sweater
Effects: +X Max HP; +Y Armor
Stars: Now, allies that are or will be “Initiated” gain a shield that has 25%(+25% per star) of Squishy’s Max HP at the start of each Wave. This shield only goes away when it’s destroyed.

Squishy + Dean Hardscrabble
Campaign: Involuntary Scarer: Squishy goes to talk with Hardscrabble, who didn’t notice his presence beforehand, and ends up scaring her. She compliments his Scare abilities, but Squishy is confused as to why.
Allies: Nick Wilde, The Beast, Golias
Disk Name: Scare Diploma
Effects: +X Skill Power; +50 Tenacity granted by “Initiated”
Stars: While Squishy initiates an ally, all enemies are Scared for 2(+2 per star) seconds.(Basically Barbossa’s Tia Disk but for Scare). Squishy and his allies deal 50% more damage to Scared enemies.

Which Disk is Better?

Reason of the edit: Realised that giving only 50 Reality Negation would be useless in some heroes, so I decided to go with +200%.