Hello, this is my likely submission to @Scarlet_Captain’s Concept Contest, and also the creation of a new mechanic: Researched!. Feel Free to leave any feedback! 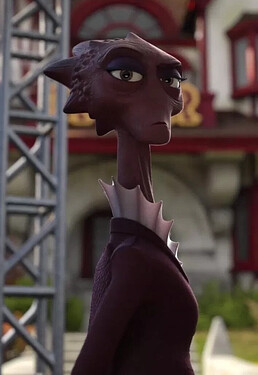 Position And Role: Frontline Control Hero
Trial Team: Yellow
Collections: Control, Stun
Entrance: Flies into the battlefield
Victory: Opens her wings while looking down on the enemies.
Defeat: Yells at enemies.
Basic Attack: Swipes her claw at enemies.
Description: Dean Hardscrabble makes the enemies miss their attacks with her imponent presence and stunning scare technics.
Quote: “Scariness is the true measure of a monster. If you’re not scary, what kind of a monster are you?” 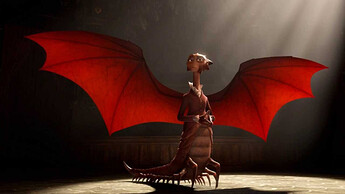 image1280×720 62.7 KB
Passive: While doing her basic attack, Hardscrabble beats her feet into the ground, granting all enemies 1 stack of “Anxious”. Enemies have a 5% chance of missing their attacks per stack of “Anxious” they have. Enemies can have a maximum of 10 of “Anxious”. When an enemy is scared while having stacks of “Anxious”, they are removed, and the enemies are stunned for 0.75 seconds per stack they had.

Active: Hardscrabble opens her wings, Scaring all enemies for 8 seconds, and if they had stacks of Anxious, she deals X damage per stack they had. Then, she flies above the battlefield and flaps her wings, knocking the enemies back.

Fantastic Damage
Hardscrabble dodges an attack, then opens her wings, knocking back nearby enemies and dealing X damage to them. This skill has a cooldown of 8 seconds.

“What Kind of Monster are you?”
Every time an enemy is knocked back, they receive 2 stacks of “Anxious”. The limit of stacks of Anxious is now 15.
The applying of “Anxious” might fail in enemies above level X

Legendary Scarer
Hardscrabble cannot be disabled by enemies that are either Scared or with stack(s) of “Anxious”. Enemies that have their disables blocked by this skill receive 1 stack of Fatigue.
The applying of Fatigue might fail in enemies above level W.
Other Stat Boosts:
+X Skill Power
+Y Reality
+Z Evasion

Hardscrabble + Mr. Big & Koslov
Campaign: The Mafia of Scares: Hardscrabble, curious about the criminal use of scare, goes after Mr. Big for a research.
Allies: Randall, Oogie Boogie, Emperor Zurg
Disk Name: University Paper
Effects: +X Armor and Reality to Hardscrabble and her Allies if they Scare an enemy.
Stars: Slow Scare now applies “Researched” to all enemies for 2 seconds(+2 per star).
If a researched enemy is either Scared or Studied, there will be a 100% chance of super criting with the respectives types of damage.