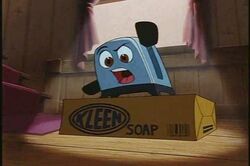 Toaster hypes up his allies by boosting their morale and self-esteem, and is ultimately determined to keep his friends safe from any potential threats.
Trial Team: Blue
Role: Midline Support
Stars:

Quote: “Well, you can do what you like. We’re not gonna give up hope.”

Green Skill - Sunbeam Reflect
Toaster reflects sunlight off of himself to blind enemies for 6 seconds.

Purple Skill - I Am Serious
If an ally reaches 0HP, regardless of whether or not they revive themselves, Toaster grants himself X additional Skill power and 50% additional attack speed. This can only occur one per wave.

Red Skill - No Matter What
Each time Toaster performs his “Sunbeam Reflect” skill, allies gain X HP for every second enemies are blinded. His max HP is increased to X, and his attack speed is increased by 20%.

Toaster + Buzz Lightyear
Campaign: A New Purpose - Without his Master, Toaster finds himself stuck in a strange world, with no one to look after. However, he acquires Buzz’s guidance in pursuing a lifestyle where he can help others in other ways.
Disk: Assistance Award
Disk Memory: Each time Toaster performs his “Moral Support” skill, he also grants himself the Skill power boost and extra attack speed for 8 seconds.
Disk Power: Z Blue Skill power, Z energy gain
Allies: Joy, Scrooge McDuck, Genie

This is way to short