This is my submission for Disney/Pixar Short Concept Contest! 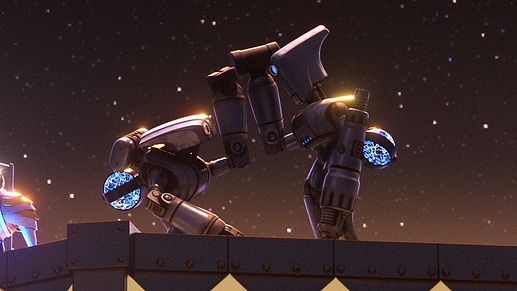 Robo buddies Smash and Grab throw crystals and drill enemies to protect each other.

Role: Control
Position: Front
Trial Team: Blue
Entrance: They walk into position and connect the energy orb to each other
Victory: They high five each other
Defeat: Energy orb breaks and they deactivate
Attack: Smash attacks with hammer and Grab throws a crystal

White Skill: Energy Bomb (Fantastic Damage)
Smash throws a spare energy orb at the farthest enemy, dealing X damage to them and enemies around them and stunning them for 5 seconds. If they are above 500 energy they loose 500 energy and are stunned for 10 seconds instead.

This deals X more damage each time they use this skill for the rest of the battle. The longer stun’s duration is reduced to 5 seconds if the enemies above 500 energy are above level X.

Green Skill: Drill Surge (Normal Damage)
Smash drills the closest enemy with his drill, dealing X damage and shredding X armor from the enemy. If Smash and Grab have more than 700 energy, the enemy has their attack and movement speed reduced by 60% for 5 seconds.

The amount of armor shredded is reduced against enemies above level X.

Blue Skill: Crystal Toss (Normal Damage)
Grab throws a big chunk of crystal at the closest enemy, dealing X damage to them and knocking them back. If the enemy is stunned, they lose 200 energy.

Purple Skill: Robot Energy
Smash and Grab gain X basic damage and 10% attack and movement speed for every 100 energy that they have. These bonuses are reduced by 50% each time they use their active for the rest of the wave.

If an enemy has more starting armor than Smash and Grab, they take 75% more damage from them.

The effect is reduced against enemies above level X.

I never thought of this until now very nice concept

Thanks for submitting! What a fun and creative entry!

Sorry for reviving, but make sure to Vote for my concept!