Welcome to the Disney Heroes: Battle Mode 1.15.5-A Update! This release features Gerald, Marlin & Nemo from Disney and Pixar’s Finding Dory! Plus some changes to arena and coliseum challenger for servers 1 & 2 in preparation for Challenger Seasons coming with the 1.16 update! 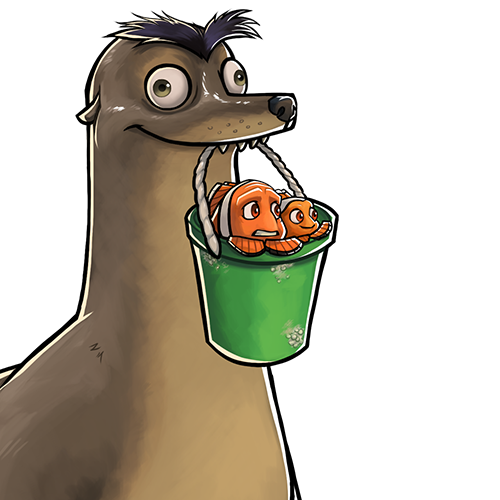 Seagull Swoop
Passive: Gerald, Marlin & Nemo begin each wave on Gerald’s rock. When Gerald is knocked back, they fall off his rock, unable to use skills or basic attacks until they climb back on. While on Gerald’s rock, they take less damage from all sources.

Active: A swarm of seagulls swoops overhead, dealing damage to the front most enemy and enemies around them.

Rock On
While Gerald, Marlin & Nemo are on Gerald’s rock, allies heal a percent of their max HP over time.

With this update, we are increasing the limit on the number of people who can be in the Challenger tier of Arena and Coliseum. We are doing this in anticipation of the 1.16 update, when we will release Challenger Seasons on servers 1 & 2.

New for everyone on servers 1 & 2 with the 1.16 update: All promotion timers will freeze when a player moves out of a promotion slot. So, if you’re in a promotion slot that requires 24 hours, and after 4 hours, you get bumped down, you get to keep those 4 hours that you earned. Your timer won’t count up - only down.

We want to give you an advanced look at Challenger Seasons so once you have a chance to play it, we can make changes before it is released globally. We are open to any and all feedback to the new version of the mode. Our goal with this refresh is to make Challenger more fun and engaging, and we’re willing to change even large parts of the revitalized feature in order to make it the best possible version before global release.

Challenger Seasons is where the best of the best players will compete over the course of a four week season to earn points and climb divisions to become the Season Champion! Best of all you’ll be earning exciting daily, weekly, and seasonal rewards along the way.

Players promote into Challenger by occupying the #1 rank in Platinum I for the entire duration of their promotion timer. Once in the Challenger tier, the only way a player can be demoted is through inactivity. If a player ends the season without initiating a single attack, they are demoted the following season back to Platinum I.

In Challenger, players are placed into leagues whose sizes will typically be between 8 and 29 players. Each day players are allocated opponent keys (the number you receive is based on the size of the league). Each key is used to “unlock” one opponent, and the chance to fight them up to 3 times for free to get your best possible Fight Score. Additional chances can be earned through guild perks, VIP perks, or purchased with diamonds. Over the course of the week, you’ll have the opportunity to collect enough keys to unlock each opponent in your league. Fight points are earned for both winning battles and scoring points for special ‘seasonal’ bonuses, such as heroes remaining, or total fantastic damage done. Apart from scoring bonuses, there are also stat, gear or skill based seasonal Division Rules (4 in total) that are unlocked and added at each higher division.

Players are ranked based on their Total Fight Points. At the end of each of the first three weeks, the top ranked players in each league are promoted. Players can promote up 1 or 2 divisions at a time, based on rank and available slots. In the last week of the season, players who are promoted into Division I then compete to become the Season Champion and earn exclusive rewards!

At the end of each season, players earn Legacy Points based on their final division and rank. All the Challenger tiers are reset and the battle begins again with a new set of season rules and bonuses.

This will be a server update only, and will not require an update from the app store. This update is currently scheduled for Tuesday, February 18.

Marlin and Nemo look a little… without texture (especially Marlin. Where are his wrinkles?)

So, if you’re in a promotion slot that requires 24 hours

What about leagues that require 48 hours? Will it be covered like this?

So, if you’re in a promotion slot that requires 24 hours

What about leagues that require 48 hours? Will it be covered like this?

Yes, this was just an example. This change will apply to all promotion timers.

What trial team are the new trio going to be in?

YAY I LOVE Finding Nemo and Finding Dory so I can’t wait!

Legacy Points based on their final division and rank

And what we do with this? Is a new currency or what is the propose?

It means nothing for servers 16-22. Almost everybody that’s been active has a (almost) maxed Gonzo and we were expecting changes that affect the gameplay, not just one extra event hero.

Legacy Points based on their final division and rank

And what we do with this? Is a new currency or what is the propose?

Bragging rights. It’s just something fun, similar to the contest Hall of Fame.

There will be spotlight for new characters after update?

Gerald, Marlin & Nemo will be an event exclusive hero on servers 1-15.

Well, at least they’re still in the game to play with…even if they’ll be very weak for me lol

Very interested in those promo timers on 1 and 2. I’ve stagnated 4ever because I’m not staying awake 48 hours straight to guard an arena where the top 5 roll every hour. Hope they go well and reach 16 sooner rather than later.

And at least everyone will get them.

In the last week of the season, players who are promoted into Division I then compete to become the Season Champion and earn exclusive rewards!

Been waiting for Nemo and Marlin. Glad Gerald’s in there with them. So cute

Why not move randall??? Why keep him in the crate…