Let me guess it’s about money for Sheriff of Nothingham

Well Lock Shock and Barrel I get for QuackerJack but Slinky dog?

Oh here it is, the refresh that I asked for who knows how many times when I used her

Hm perhaps it’s time to pick back Shank from the top ~25 of my roster where I left her. I guess pairing with Joy will still be a must but I’m excited to try her

Whsg do you mean No?!

Now we got the bad guys!! 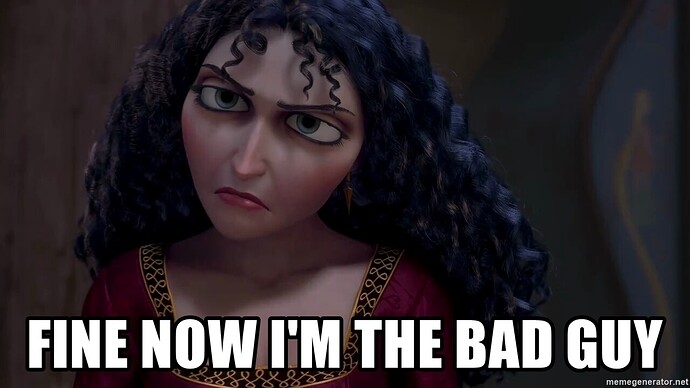 So this is what they’ve been up to?

is the Codebase going to drop more megabits for players above level 245 when the new rank is released?

Sheriff of Nottingham looks interesting, and possibly points to a renewed focus on Sap, which seems to have pretty much been neglected since its introduction.

Quackerjack looks potentially OP, especially giving out Fatigue stacks like stale candy on Halloween. Plus, we finally got a hero added to the game that wasn’t leaked ahead of time, and he’s one of my favorite villains from one of my favorite Disney series. Color me gobsmacked.

Shank’s refresh shows promise, focusing on improving her performance in her existing niche, which is arguably a unique one and potentially useful. Though, once again, I won’t be able to spare the resources to try her out, I hope her fans are able to make good use of her in their teams now.

Is the fix that Tink gives the shield to Peter Pan, or that she’s no longer able to steal it?

Any further details on this improvement? There’s certainly some changes I’d like to see made to the feature; if any were implemented, I might start putting it to use beyond jumping new heroes up to Purple.

Sheriff of Nottingham will be available in City Watch Crates

Soooo… I’m guessing you won’t be able to tell us, but just on the off chance you can, where will John Silver end up when he’s replaced as the Challenger League exclusive hero?

Overall, a good update, even if (sigh) it includes a rank and level increase. Depending on the Power Promote polish, it might even get bumped up to excellent.

Finally the Patch Notes has come

A hero to change the city watch crates and the first Tank of Back-Line, he looks interesting

Quackerjack is a mid-line ”Control” character on the Red team. Quackerjack will only be available in Diamond Crates.

Totally unexpected, another “Hero” of the Darkwing Duck, GOOD

Well obviously we would have the Cap Raise

Quackerjack throws a Mr. Banana-Brain at the enemy with the most stacks of Fatigue and it explodes, dealing Damage to enemies in an area and additional Damage per stack of Fatigue each damaged enemy has

@Loutre is this supposed to flipped

Sheriff of Nottingham will be an event exclusive character in City Watch Crates.

I don’t get it… CW crate and Challengers exclusive heroes were tied, why this is happening now?
It should be…

Why cutting off the rotations which are terrible already?
@Loutre? Is that definitely correct?

More fatigue… hmmm, wonder when will be more hardy.

And who is now glad to upgrade her and make her 3rd best toon? Me!
But the refresh seems pretty empty… and does nothing about her biggest issue - terrible tenacity.

“Final Lap” negates more damage against Normal Damage attacks. Shank and her allies take less damage from Normal Crits. When an enemy Normal Crits Shank, her Armor is increased for the rest of the wave up to a max.

Wait… no additional stat bonuses increases?
Also, I hope she will be removed from friendships as an enemy.

I… umm… I need to see it to comment on that.

Well, good update, mainly for finally releasing 2 heroes at once!

Quackerjack throws a Mr. Banana-Brain at the enemy with the most stacks of Fatigue and it explodes, dealing Damage to enemies in an area and additional Damage per stack of Fatigue each damaged enemy has.

@Loutre I think you made a mistake

I love his design!

Quackerjack: (Enter into city cackling): Soon this whole city will be my playground.

I don’t get it… CW crate and Challengers exclusive heroes were tied, why this is happening now?
It should be…

Why cutting off the rotations which are terrible already?

Could you ask the team about that?
Feels wrong.

Whsg do you mean No?!

Sheriff starts in the back, but after a set time changes to melee attack which makes him go to the front. So in all technicality not a back-line Tank, just written as one.
And he is basically 100% switched around Esmeralda, who starts at the front and moves to the back, leaving Djali in the front.

Oh I get it now

YESS! I’m all for this!! This was so worth the wait!! Sheriff as the first backline tank sounds interesting. I was SO not expecting Quackerjack! He looks so amazing!! He’s gonna be a blast to play as!! Nice to know that Megavolt is not alone in the new city!! Here’s hoping for Bushroot and Liquidator soon!!

He here to take the money from the creeps