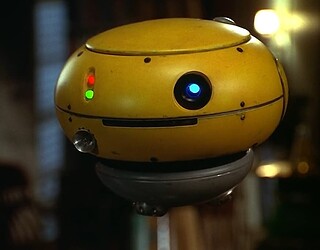 A loyal and protective science robot like Weebo is an ally the City needs. Her posse of automated household machines, as well as Weber, are always at the ready, and that’s not all! She also knows how to throw a party!
Trial Team: Yellow
Role: Midline Control
Stars:

Green Skill - Human Hologram
Weebo projects a holographic human version of herself, charming the enemy with the most HP for 8 seconds.

Blue Skill - Janitorial Services
Weebo sends Weber to use his vacuum on the strongest enemy, stealing X energy from them. He then returns to the player’s lineup and gives that energy to Weebo.

Weebo + EVE
Campaign: Watch and Learn - EVE and Weebo turn out to be a pretty inseparable pair of friends. Weebo enjoys learning from EVE about self-defense, as does EVE from Weebo about improving her love life with WALL-E.
Disk: Friendly Fire
Disk Memory: If Weebo is ever charmed, allies take 75% less damage from her.
Disk Power: Z White Skill power
Allies: Gadget, Ian Lightfoot, Launchpad McQuack

Very Interesting concept. Haven’t thought about the movie in a long time, but this is a very good concept.