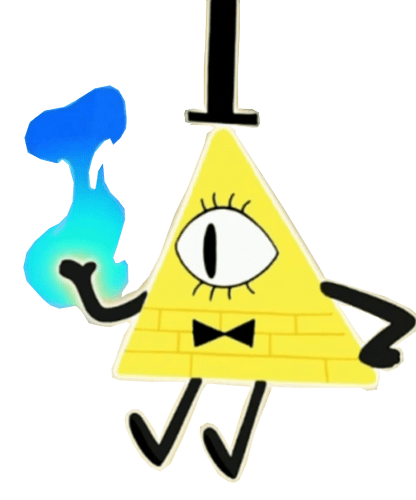 “Remember, reality is an illusion, the universe is a hologram, buy gold, bye!”

a dream demon with a bunch of demonic powers, Bill cipher uses those powers to keep the nightmare going

Entrance: a triangle with flames around it appears before it then turns into bill as he then gets into position

Victory: bill tap-dances with his cane

Defeat: Bill freaks out as he then begins to glitch out.

White: its a deal

Bill enlarges his fist and raises it over the enemies before he then straightens his bowtie and slams his enlarged fist down onto the enemies, dealing x damage and prevents enemies from healing from all sources for 6 seconds.

Bill transforms the most wanted enemy into a golden statue for 7 seconds which freezes the enemy in place until the effect wears off.

When in statue form, bill heals continuously for x amount until his energy runs out.

“It’s a deal” now takes x energy from the enemy that was possessed by Bill when his energy runs out.

All crits now do 40% more damage whenever Bill or one of his allies gain a shield.

3 star heroes are no longer coming to the game, sadly

bill appears in a puff of smoke

Bill tries to reach is hand out

White: its a deal

If you are going to copy a skill from another concept, at least modify it and don’t copy the name if you have a choice

No… “three letters back” is a horrible skill name…

I will say this is kind of unique…

whenever Bill or one of his allies gain a shield.

What is “attack power”? Do you mean skill power or attack speed?

And how will memories be used?

Disclaimer: This is just my opinion. If you liked the concept, okay. I am fine with that. Just don’t come up to me with the “You are mean!” complaints.

On a side note: you missed the opportunity for Bill to be friends with another character that has a similar personality to him: Hades

He actually does this in the weirdmagedon intro

Yeah, I remember that.

I know. But he copied Grunkle Stan. Therefore, my comment is still valid

That does make sense though.

Hey there!!! Thanks you for your feedback!!!

Everything piece of feedback can help me to be better at making concepts in the future!!