Here is my submission for the Animal Kingdom Concept Contest!: Heimlich from A Bug’s Life. 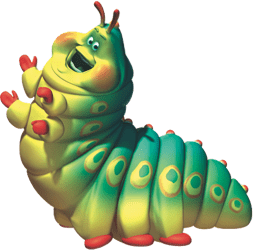 Description: Floating like a butterfly and stinging like a bee, Heimlich has his appetite for his performances to show off to his foes.

Entrance: Heimlich lands down to position by using his arms holding onto leaves as he flaps down like a butterfly.

Normal Damage
Passive: Instead of having a basic attack, Heimlich eats his leaf, healing himself X HP.

Active: Heimlich gets in his bee outfit and run across the battlefield, dealing knockback and X damage as he passes by.

Fantastic Damage
Heimlich eats some boysenberries, making his head go into his body when eating the berries. This will deal X damage and scares enemies for 8 seconds.

Blue Skill: Candy Corn
Heimlich brings out his candy corn and eats it. This heals Heimlich X HP as well as granting himself X reality and X Max HP.

Purple Skill: Hungry For Performance
“Head Gone Missing” will also give Heimlich 2 stacks of “Hardy.” And each “Hardy” removed, Heimlich gains X reality and X Max HP for the rest of the wave.

This skill has a chance to fail if Heimlich is above level Z.

A surprise concept coming next week on Thursday, Thanksgiving!

Feedback is welcomed and I hope you liked it!

This should probably say: “Instead of a standard basic attack…”

“Head Gone Missing” will also give Heimlich 5 stacks of “Hardy.”

I think 5 is a bit too much given this skill would, in theory, happen once every 10-20 seconds. Maybe make it 2 stacks.

Apart from that, I love it.

Ok, I’ll change that. Thanks for the feedback

Thank you for submitting